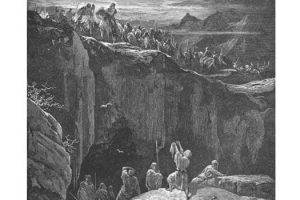 
2 So Saul arose and went down to the wilderness of Ziph, with three thousand chosen men of Israel, to seek David in the wilderness of Ziph. 7 So David and Abi’shai went to the army by night; and there lay Saul sleeping within the encampment, with his spear stuck in the ground at his head; and Abner and the army lay around him. 8 Then said Abi’shai to David, “God has given your enemy into your hand this day; now therefore let me pin him to the earth with one stroke of the spear, and I will not strike him twice.” 9 But David said to Abi’shai, “Do not destroy him; for who can put forth his hand against the LORD’S anointed, and be guiltless?” 12 So David took the spear and the jar of water from Saul’s head; and they went away. No man saw it, or knew it, nor did any awake; for they were all asleep, because a deep sleep from the LORD had fallen upon them. 13 Then David went over to the other side, and stood afar off on the top of the mountain, with a great space between them; 22 And David made answer, “Here is the spear, O king! Let one of the young men come over and fetch it. 23 The LORD rewards every man for his righteousness and his faithfulness; for the LORD gave you into my hand today, and I would not put forth my hand against the LORD’S anointed.


45 Thus it is written, “The first man Adam became a living being”; the last Adam became a life-giving spirit. 46 But it is not the spiritual which is first but the physical, and then the spiritual. 47 The first man was from the earth, a man of dust; the second man is from heaven. 48 As was the man of dust, so are those who are of the dust; and as is the man of heaven, so are those who are of heaven. 49 Just as we have borne the image of the man of dust, we shall also bear the image of the man of heaven.


1 Bless the LORD, O my soul; and all that is within me, bless his holy name! 2 Bless the LORD, O my soul, and forget not all his benefits, 3 who forgives all your iniquity, who heals all your diseases, 4 who redeems your life from the Pit, who crowns you with steadfast love and mercy, 8 The LORD is merciful and gracious, slow to anger and abounding in steadfast love. 10 He does not deal with us according to our sins, nor requite us according to our iniquities. 12 as far as the east is from the west, so far does he remove our transgressions from us. 13 As a father pities his children, so the LORD pities those who fear him.


27 “But I say to you that hear, Love your enemies, do good to those who hate you, 28 bless those who curse you, pray for those who abuse you. 29 To him who strikes you on the cheek, offer the other also; and from him who takes away your coat do not withhold even your shirt. 30 Give to every one who begs from you; and of him who takes away your goods do not ask them again. 31 And as you wish that men would do to you, do so to them. 32 “If you love those who love you, what credit is that to you? For even sinners love those who love them. 33 And if you do good to those who do good to you, what credit is that to you? For even sinners do the same. 34 And if you lend to those from whom you hope to receive, what credit is that to you? Even sinners lend to sinners, to receive as much again. 35 But love your enemies, and do good, and lend, expecting nothing in return; and your reward will be great, and you will be sons of the Most High; for he is kind to the ungrateful and the selfish. 36 Be merciful, even as your Father is merciful. 37 “Judge not, and you will not be judged; condemn not, and you will not be condemned; forgive, and you will be forgiven; 38 give, and it will be given to you; good measure, pressed down, shaken together, running over, will be put into your lap. For the measure you give will be the measure you get back.”

Reflection for the day: “If a man finds it very hard to forgive injuries, let him look at a Crucifix, and think that Christ shed all His Blood for him, and not only forgave His enemies, but even prayed His Heavenly Father to forgive them also. Let him remember that when he says the Pater Noster [Our Father], every day, instead of asking pardon for his sins, he is calling down vengeance on himself.” — Saint Philip Neri