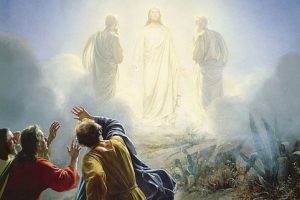 1 Now faith is the assurance of things hoped for, the conviction of things not seen. 2 For by it the men of old received divine approval. 3 By faith we understand that the world was created by the word of God, so that what is seen was made out of things which do not appear. 4 By faith Abel offered to God a more acceptable sacrifice than Cain, through which he received approval as righteous, God bearing witness by accepting his gifts; he died, but through his faith he is still speaking. 5 By faith Enoch was taken up so that he should not see death; and he was not found, because God had taken him. Now before he was taken he was attested as having pleased God. 6 And without faith it is impossible to please him. For whoever would draw near to God must believe that he exists and that he rewards those who seek him. 7 By faith Noah, being warned by God concerning events as yet unseen, took heed and constructed an ark for the saving of his household; by this he condemned the world and became an heir of the righteousness which comes by faith.

2 Every day I will bless thee, and praise thy name for ever and ever. 3 Great is the LORD, and greatly to be praised, and his greatness is unsearchable. 4 One generation shall laud thy works to another, and shall declare thy mighty acts. 5 On the glorious splendor of thy majesty, and on thy wondrous works, I will meditate. 10 All thy works shall give thanks to thee, O LORD, and all thy saints shall bless thee! 11 They shall speak of the glory of thy kingdom, and tell of thy power.

2 And after six days Jesus took with him Peter and James and John, and led them up a high mountain apart by themselves; and he was transfigured before them, 3 and his garments became glistening, intensely white, as no fuller on earth could bleach them. 4 And there appeared to them Eli’jah with Moses; and they were talking to Jesus. 5 And Peter said to Jesus, “Master, it is well that we are here; let us make three booths, one for you and one for Moses and one for Eli’jah.” 6 For he did not know what to say, for they were exceedingly afraid. 7 And a cloud overshadowed them, and a voice came out of the cloud, “This is my beloved Son; listen to him.” 8 And suddenly looking around they no longer saw any one with them but Jesus only. 9 And as they were coming down the mountain, he charged them to tell no one what they had seen, until the Son of man should have risen from the dead. 10 So they kept the matter to themselves, questioning what the rising from the dead meant. 11 And they asked him, “Why do the scribes say that first Eli’jah must come?” 12 And he said to them, “Eli’jah does come first to restore all things; and how is it written of the Son of man, that he should suffer many things and be treated with contempt? 13 But I tell you that Eli’jah has come, and they did to him whatever they pleased, as it is written of him.”

Reflection for the day: “Hear me declare with boldness, I am a Christian.” — St. Polycarp