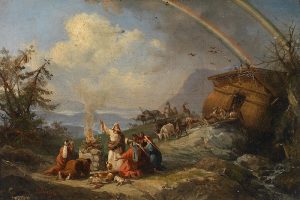 
6 At the end of forty days Noah opened the window of the ark which he had made, 7 and sent forth a raven; and it went to and fro until the waters were dried up from the earth. 8 Then he sent forth a dove from him, to see if the waters had subsided from the face of the ground; 9 but the dove found no place to set her foot, and she returned to him to the ark, for the waters were still on the face of the whole earth. So he put forth his hand and took her and brought her into the ark with him. 10 He waited another seven days, and again he sent forth the dove out of the ark; 11 and the dove came back to him in the evening, and lo, in her mouth a freshly plucked olive leaf; so Noah knew that the waters had subsided from the earth. 12 Then he waited another seven days, and sent forth the dove; and she did not return to him any more. 13 In the six hundred and first year, in the first month, the first day of the month, the waters were dried from off the earth; and Noah removed the covering of the ark, and looked, and behold, the face of the ground was dry. 20 Then Noah built an altar to the LORD, and took of every clean animal and of every clean bird, and offered burnt offerings on the altar. 21 And when the LORD smelled the pleasing odor, the LORD said in his heart, “I will never again curse the ground because of man, for the imagination of man’s heart is evil from his youth; neither will I ever again destroy every living creature as I have done. 22 While the earth remains, seedtime and harvest, cold and heat, summer and winter, day and night, shall not cease.”


22 And they came to Beth-sa’ida. And some people brought to him a blind man, and begged him to touch him. 23 And he took the blind man by the hand, and led him out of the village; and when he had spit on his eyes and laid his hands upon him, he asked him, “Do you see anything?” 24 And he looked up and said, “I see men; but they look like trees, walking.” 25 Then again he laid his hands upon his eyes; and he looked intently and was restored, and saw everything clearly. 26 And he sent him away to his home, saying, “Do not even enter the village.”

Reflection for the day: ”The more a person loves God, the more reason he has to hope in Him. This hope produces in the Saints an unutterable peace, which they preserve even in adversity, because as they love God, and know how beautiful He is to those who love Him, they place all their confidence and find all their repose in Him alone.” — Saint Alphonsus Liguori