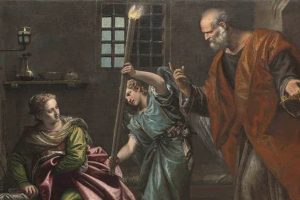 
1 Therefore, since we are surrounded by so great a cloud of witnesses, let us also lay aside every weight, and sin which clings so closely, and let us run with perseverance the race that is set before us, 2 looking to Jesus the pioneer and perfecter of our faith, who for the joy that was set before him endured the cross, despising the shame, and is seated at the right hand of the throne of God. 3 Consider him who endured from sinners such hostility against himself, so that you may not grow weary or fainthearted. 4 In your struggle against sin you have not yet resisted to the point of shedding your blood.


25 From thee comes my praise in the great congregation; my vows I will pay before those who fear him. 26 The afflicted shall eat and be satisfied; those who seek him shall praise the LORD! May your hearts live for ever! 27 All the ends of the earth shall remember and turn to the LORD; and all the families of the nations shall worship before him. 29 Yea, to him shall all the proud of the earth bow down; before him shall bow all who go down to the dust, and he who cannot keep himself alive. 30 Posterity shall serve him; men shall tell of the Lord to the coming generation, 31 and proclaim his deliverance to a people yet unborn, that he has wrought it.

Reflection for the day: “Lord, my Creator, You have protected me since I was in the cradle. You have taken me from the love of the world and given me patience to suffer. Now receive my spirit.” – St. Agatha