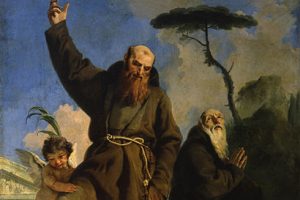 32 And what more shall I say? For time would fail me to tell of Gideon, Barak, Samson, Jephthah, of David and Samuel and the prophets — 33 who through faith conquered kingdoms, enforced justice, received promises, stopped the mouths of lions, 34 quenched raging fire, escaped the edge of the sword, won strength out of weakness, became mighty in war, put foreign armies to flight. 35 Women received their dead by resurrection. Some were tortured, refusing to accept release, that they might rise again to a better life. 36 Others suffered mocking and scourging, and even chains and imprisonment. 37 They were stoned, they were sawn in two, they were killed with the sword; they went about in skins of sheep and goats, destitute, afflicted, ill-treated — 38 of whom the world was not worthy — wandering over deserts and mountains, and in dens and caves of the earth. 39 And all these, though well attested by their faith, did not receive what was promised, 40 since God had foreseen something better for us, that apart from us they should not be made perfect.

19 O how abundant is thy goodness, which thou hast laid up for those who fear thee, and wrought for those who take refuge in thee, in the sight of the sons of men! 20 In the covert of thy presence thou hidest them from the plots of men; thou holdest them safe under thy shelter from the strife of tongues. 21 Blessed be the LORD, for he has wondrously shown his steadfast love to me when I was beset as in a besieged city. 22 I had said in my alarm, “I am driven far from thy sight.” But thou didst hear my supplications, when I cried to thee for help. 23 Love the LORD, all you his saints! The LORD preserves the faithful, but abundantly requites him who acts haughtily.

1 They came to the other side of the sea, to the country of the Ger’asenes. 2 And when he had come out of the boat, there met him out of the tombs a man with an unclean spirit, 3 who lived among the tombs; and no one could bind him any more, even with a chain; 4 for he had often been bound with fetters and chains, but the chains he wrenched apart, and the fetters he broke in pieces; and no one had the strength to subdue him. 5 Night and day among the tombs and on the mountains he was always crying out, and bruising himself with stones. 6 And when he saw Jesus from afar, he ran and worshiped him; 7 and crying out with a loud voice, he said, “What have you to do with me, Jesus, Son of the Most High God? I adjure you by God, do not torment me.” 8 For he had said to him, “Come out of the man, you unclean spirit!” 9 And Jesus asked him, “What is your name?” He replied, “My name is Legion; for we are many.” 10 And he begged him eagerly not to send them out of the country. 11 Now a great herd of swine was feeding there on the hillside; 12 and they begged him, “Send us to the swine, let us enter them.” 13 So he gave them leave. And the unclean spirits came out, and entered the swine; and the herd, numbering about two thousand, rushed down the steep bank into the sea, and were drowned in the sea. 14 The herdsmen fled, and told it in the city and in the country. And people came to see what it was that had happened. 15 And they came to Jesus, and saw the demoniac sitting there, clothed and in his right mind, the man who had had the legion; and they were afraid. 16 And those who had seen it told what had happened to the demoniac and to the swine. 17 And they began to beg Jesus to depart from their neighborhood. 18 And as he was getting into the boat, the man who had been possessed with demons begged him that he might be with him. 19 But he refused, and said to him, “Go home to your friends, and tell them how much the Lord has done for you, and how he has had mercy on you.” 20 And he went away and began to proclaim in the Decap’olis how much Jesus had done for him; and all men marveled.

Reflection for the day: “Every Christian must be a living book wherein one can read the teaching of the gospel. This is what Saint Paul says to the Corinthians, ‘Clearly you are a letter of Christ which I have delivered, a letter written not with ink, but by the Spirit of the living God, not on tablets of stone but on tablets of flesh in the heart’ (2 Corinthians 3:3). Our heart is the parchment; through my ministry the Holy Spirit is the writer because ‘my tongue is nimble as the pen of a skillful scribe’ (Psalms 45:2).” — St. Joseph of Leonessa