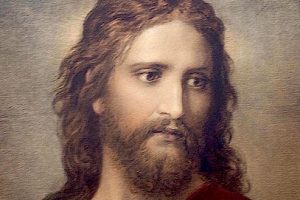 2 And Ezra the priest brought the law before the assembly, both men and women and all who could hear with understanding, on the first day of the seventh month. 3 And he read from it facing the square before the Water Gate from early morning until midday, in the presence of the men and the women and those who could understand; and the ears of all the people were attentive to the book of the law. 4 And Ezra the scribe stood on a wooden pulpit which they had made for the purpose; and beside him stood Mattithi’ah, Shema, Anai’ah, Uri’ah, Hilki’ah, and Ma-asei’ah on his right hand; and Pedai’ah, Mish’a-el, Malchi’jah, Hashum, Hash-bad’danah, Zechari’ah, and Meshul’lam on his left hand. 5 And Ezra opened the book in the sight of all the people, for he was above all the people; and when he opened it all the people stood. 6 And Ezra blessed the LORD, the great God; and all the people answered, “Amen, Amen,” lifting up their hands; and they bowed their heads and worshiped the LORD with their faces to the ground. 8 And they read from the book, from the law of God, clearly; and they gave the sense, so that the people understood the reading. 9 And Nehemi’ah, who was the governor, and Ezra the priest and scribe, and the Levites who taught the people said to all the people, “This day is holy to the LORD your God; do not mourn or weep.” For all the people wept when they heard the words of the law. 10 Then he said to them, “Go your way, eat the fat and drink sweet wine and send portions to him for whom nothing is prepared; for this day is holy to our Lord; and do not be grieved, for the joy of the LORD is your strength.”

1:1 Inasmuch as many have undertaken to compile a narrative of the things which have been accomplished among us, 2 just as they were delivered to us by those who from the beginning were eyewitnesses and ministers of the word, 3 it seemed good to me also, having followed all things closely for some time past, to write an orderly account for you, most excellent The-oph’ilus, 4 that you may know the truth concerning the things of which you have been informed. 4:14 And Jesus returned in the power of the Spirit into Galilee, and a report concerning him went out through all the surrounding country. 15 And he taught in their synagogues, being glorified by all. 16 And he came to Nazareth, where he had been brought up; and he went to the synagogue, as his custom was, on the sabbath day. And he stood up to read; 17 and there was given to him the book of the prophet Isaiah. He opened the book and found the place where it was written, 18 “The Spirit of the Lord is upon me, because he has anointed me to preach good news to the poor. He has sent me to proclaim release to the captives and recovering of sight to the blind, to set at liberty those who are oppressed, 19 to proclaim the acceptable year of the Lord.” 20 And he closed the book, and gave it back to the attendant, and sat down; and the eyes of all in the synagogue were fixed on him. 21 And he began to say to them, “Today this scripture has been fulfilled in your hearing.”

Reflection for the day: “We do not know God from His essence. We know Him rather from the grandeur of His creation and from His providential care for all creatures. For through these, as though they were mirrors, we may attain insight into His infinite goodness, wisdom and power.” – St. Maximos the Confessor