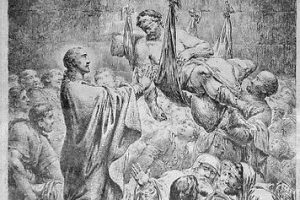 1 Therefore, while the promise of entering his rest remains, let us fear lest any of you be judged to have failed to reach it. 2 For good news came to us just as to them; but the message which they heard did not benefit them, because it did not meet with faith in the hearers. 3 For we who have believed enter that rest, as he has said, “As I swore in my wrath, `They shall never enter my rest, ‘”although his works were finished from the foundation of the world. 4 For he has somewhere spoken of the seventh day in this way, “And God rested on the seventh day from all his works.” 5 And again in this place he said, “They shall never enter my rest.” 11 Let us therefore strive to enter that rest, that no one fall by the same sort of disobedience.

3 Things that we have heard and known, that our fathers have told us. 4 We will not hide them from their children, but tell to the coming generation the glorious deeds of the LORD, and his might, and the wonders which he has wrought. 6 That the next generation might know them, the children yet unborn, and arise and tell them to their children, 7 so that they should set their hope in God, and not forget the works of God, but keep his commandments; 8 and that they should not be like their fathers, a stubborn and rebellious generation, a generation whose heart was not steadfast, whose spirit was not faithful to God.

1 And when he returned to Caper’na-um after some days, it was reported that he was at home. 2 And many were gathered together, so that there was no longer room for them, not even about the door; and he was preaching the word to them. 3 And they came, bringing to him a paralytic carried by four men. 4 And when they could not get near him because of the crowd, they removed the roof above him; and when they had made an opening, they let down the pallet on which the paralytic lay. 5 And when Jesus saw their faith, he said to the paralytic, “My son, your sins are forgiven.” 6 Now some of the scribes were sitting there, questioning in their hearts, 7“Why does this man speak thus? It is blasphemy! Who can forgive sins but God alone?” 8 And immediately Jesus, perceiving in his spirit that they thus questioned within themselves, said to them, “Why do you question thus in your hearts? 9 Which is easier, to say to the paralytic, `Your sins are forgiven,’ or to say, `Rise, take up your pallet and walk’? 10 But that you may know that the Son of man has authority on earth to forgive sins” — he said to the paralytic — 11 “I say to you, rise, take up your pallet and go home.” 12 And he rose, and immediately took up the pallet and went out before them all; so that they were all amazed and glorified God, saying, “We never saw anything like this!”

Reflection for the day:  “Pray with great confidence, with confidence based upon the goodness and infinite generosity of God and upon the promises of Jesus Christ. God is a spring of living water which flows unceasingly into the hearts of those who pray.” – St. Louis de Montfort

Tuesday of the 1st Week of Advent
Daily Mass Readings »

Archbishop Michael Miller of Vancouver expressed disappointment with the government’s...