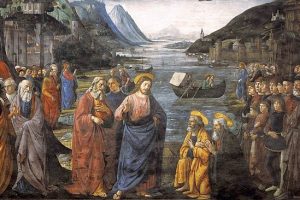 
1 In many and various ways God spoke of old to our fathers by the prophets; 2 but in these last days he has spoken to us by a Son, whom he appointed the heir of all things, through whom also he created the world. 3 He reflects the glory of God and bears the very stamp of his nature, upholding the universe by his word of power. When he had made purification for sins, he sat down at the right hand of the Majesty on high, 4 having become as much superior to angels as the name he has obtained is more excellent than theirs. 5 For to what angel did God ever say, “Thou art my Son, today I have begotten thee”? Or again, “I will be to him a father, and he shall be to me a son”? 6 And again, when he brings the first-born into the world, he says, “Let all God’s angels worship him.”


1 The LORD reigns; let the earth rejoice; let the many coastlands be glad! 2 Clouds and thick darkness are round about him; righteousness and justice are the foundation of his throne. 6 The heavens proclaim his righteousness; and all the peoples behold his glory. 7 All worshipers of images are put to shame, who make their boast in worthless idols; all gods bow down before him. 9 For thou, O LORD, art most high over all the earth; thou art exalted far above all gods.


14 Now after John was arrested, Jesus came into Galilee, preaching the gospel of God, 15 and saying, “The time is fulfilled, and the kingdom of God is at hand; repent, and believe in the gospel.” 16 And passing along by the Sea of Galilee, he saw Simon and Andrew the brother of Simon casting a net in the sea; for they were fishermen. 17 And Jesus said to them, “Follow me and I will make you become fishers of men.” 18 And immediately they left their nets and followed him. 19 And going on a little farther, he saw James the son of Zeb’edee and John his brother, who were in their boat mending the nets. 20 And immediately he called them; and they left their father Zeb’edee in the boat with the hired servants, and followed him.

Reflection for the day:  “If we do not risk anything for God we will never do anything great for Him.” – St. Louis de Montfort