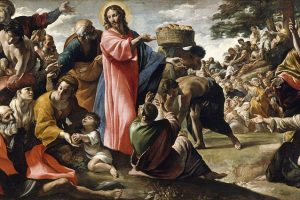 
7 Beloved, let us love one another; for love is of God, and he who loves is born of God and knows God. 8 He who does not love does not know God; for God is love. 9 In this the love of God was made manifest among us, that God sent his only Son into the world, so that we might live through him. 10 In this is love, not that we loved God but that he loved us and sent his Son to be the expiation for our sins.


A Psalm of Solomon. 1 Give the king thy justice, O God, and thy righteousness to the royal son!2 May he judge thy people with righteousness, and thy poor with justice! 3 Let the mountains bear prosperity for the people, and the hills, in righteousness! 6 May he be like rain that falls on the mown grass, like showers that water the earth! 7 In his days may righteousness flourish, and peace abound, till the moon be no more!


34 As he went ashore he saw a great throng, and he had compassion on them, because they were like sheep without a shepherd; and he began to teach them many things. 35 And when it grew late, his disciples came to him and said, “This is a lonely place, and the hour is now late; 36 send them away, to go into the country and villages round about and buy themselves something to eat.” 37 But he answered them, “You give them something to eat.” And they said to him, “Shall we go and buy two hundred denarii worth of bread, and give it to them to eat?” 38 And he said to them, “How many loaves have you? Go and see.” And when they had found out, they said, “Five, and two fish.” 39 Then he commanded them all to sit down by companies upon the green grass. 40 So they sat down in groups, by hundreds and by fifties. 41 And taking the five loaves and the two fish he looked up to heaven, and blessed, and broke the loaves, and gave them to the disciples to set before the people; and he divided the two fish among them all. 42 And they all ate and were satisfied. 43 And they took up twelve baskets full of broken pieces and of the fish. 44 And those who ate the loaves were five thousand men.

Reflection for the day: “I understand now that charity consists in bearing with the faults of others, in not being surprised at their weakness, in being edified by the smallest acts of virtue we see them practice.” — St. Therese of Lisieux