The Seventh Day in the Octave of Christmas 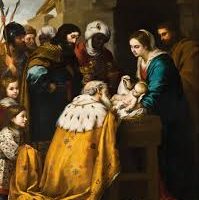 
1 John 2:18-21
18Children, it is the last hour; and as you have heard that antichrist is coming, so now many antichrists have come; therefore we know that it is the last hour. 19They went out from us, but they were not of us; for if they had been of us, they would have continued with us; but they went out, that it might be plain that they all are not of us. 20But you have been anointed by the Holy One, and you all know. 21I write to you, not because you do not know the truth, but because you know it, and know that no lie is of the truth.

1O sing to the LORD a new song; sing to the LORD, all the earth! 2Sing to the LORD, bless his name; tell of his salvation from day to day. 11Let the heavens be glad, and let the earth rejoice; let the sea roar, and all that fills it; 12let the field exult, and everything in it! Then shall all the trees of the wood sing for joy 13before the LORD, for he comes, for he comes to judge the earth. He will judge the world with righteousness, and the peoples with his truth.


1In the beginning was the Word, and the Word was with God, and the Word was God. 2He was in the beginning with God; 3all things were made through him, and without him was not anything made that was made. 4In him was life, and the life was the light of men. 5The light shines in the darkness, and the darkness has not overcome it. 6There was a man sent from God, whose name was John. 7He came for testimony, to bear witness to the light, that all might believe through him.8He was not the light, but came to bear witness to the light. 9The true light that enlightens every man was coming into the world. 10He was in the world, and the world was made through him, yet the world knew him not. 11He came to his own home, and his own people received him not. 12But to all who received him, who believed in his name, he gave power to become children of God;13who were born, not of blood nor of the will of the flesh nor of the will of man, but of God. 14And the Word became flesh and dwelt among us, full of grace and truth; we have beheld his glory, glory as of the only Son from the Father. 15(John bore witness to him, and cried, “This was he of whom I said, `He who comes after me ranks before me, for he was before me.'”) 16And from his fulness have we all received, grace upon grace. 17For the law was given through Moses; grace and truth came through Jesus Christ. 18No one has ever seen God; the only Son, who is in the bosom of the Father, he has made him known.

Reflection for the day: “If you purify your soul of attachment to and desire for things, you will understand them spiritually. If you deny your appetite for them, you will enjoy their truth, understanding what is certain in them.”-St. John of the Cross