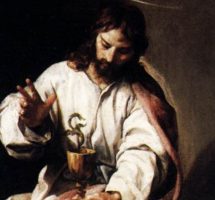 1The LORD reigns; let the earth rejoice; let the many coastlands be glad! 2Clouds and thick darkness are round about him; righteousness and justice are the foundation of his throne. 5The mountains melt like wax before the LORD, before the Lord of all the earth. 6The heavens proclaim his righteousness; and all the peoples behold his glory. 11Light dawns for the righteous, and joy for the upright in heart. 12Rejoice in the LORD, O you righteous, and give thanks to his holy name!

Reflection for the day: “Like the sun which shines on all alike, vainglory beams on every occupation. What I mean is this. I fast, and turn vainglorious. I stop fasting so that I will draw no attention to myself, and I become vainglorious over my prudence. I dress well or badly, and am vainglorious in either case. I talk or I hold my peace, and each time I am defeated. No matter how I shed this prickly thing, a spike remains to stand up against me.”-St. John Climacus