St. Leo the Great, Pope, Doctor of the Church 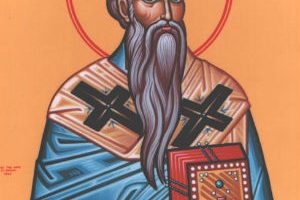 
10I rejoice in the Lord greatly that now at length you have revived your concern for me; you were indeed concerned for me, but you had no opportunity. 11Not that I complain of want; for I have learned, in whatever state I am, to be content. 12I know how to be abased, and I know how to abound; in any and all circumstances I have learned the secret of facing plenty and hunger, abundance and want. 13I can do all things in him who strengthens me. 14Yet it was kind of you to share my trouble. 15And you Philippians yourselves know that in the beginning of the gospel, when I left Macedo’nia, no church entered into partnership with me in giving and receiving except you only; 16for even in Thessaloni’ca you sent me help once and again. 17Not that I seek the gift; but I seek the fruit which increases to your credit. 18I have received full payment, and more; I am filled, having received from Epaphrodi’tus the gifts you sent, a fragrant offering, a sacrifice acceptable and pleasing to God. 19And my God will supply every need of yours according to his riches in glory in Christ Jesus.


1Praise the LORD. Blessed is the man who fears the LORD, who greatly delights in his commandments! 2His descendants will be mighty in the land; the generation of the upright will be blessed. 5It is well with the man who deals generously and lends, who conducts his affairs with justice. 6For the righteous will never be moved; he will be remembered for ever. 8His heart is steady, he will not be afraid, until he sees his desire on his adversaries. 9He has distributed freely, he has given to the poor; his righteousness endures for ever; his horn is exalted in honor.


9And I tell you, make friends for yourselves by means of unrighteous mammon, so that when it fails they may receive you into the eternal habitations. 10“He who is faithful in a very little is faithful also in much; and he who is dishonest in a very little is dishonest also in much. 11If then you have not been faithful in the unrighteous mammon, who will entrust to you the true riches? 12And if you have not been faithful in that which is another’s, who will give you that which is your own? 13No servant can serve two masters; for either he will hate the one and love the other, or he will be devoted to the one and despise the other. You cannot serve God and mammon.” 14The Pharisees, who were lovers of money, heard all this, and they scoffed at him. 15But he said to them, “You are those who justify yourselves before men, but God knows your hearts; for what is exalted among men is an abomination in the sight of God.

Reflection for the day: “Virtue is nothing without the trial of temptation, for there is no conflict without an enemy, no victory without strife.”- St. Leo the Great