First Reading: Philippians 2:5-11 5Have this mind among yourselves, which is yours in Christ Jesus, 6who, though he was in the form of God, did not count equality with God a thing to be grasped, 7but emptied himself, taking the form of a servant, being born in the likeness of men. 8And being found in human form he… 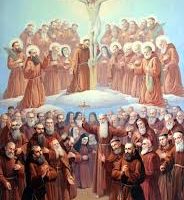 5Have this mind among yourselves, which is yours in Christ Jesus, 6who, though he was in the form of God, did not count equality with God a thing to be grasped, 7but emptied himself, taking the form of a servant, being born in the likeness of men. 8And being found in human form he humbled himself and became obedient unto death, even death on a cross. 9Therefore God has highly exalted him and bestowed on him the name which is above every name, 10that at the name of Jesus every knee should bow, in heaven and on earth and under the earth, 11and every tongue confess that Jesus Christ is Lord, to the glory of God the Father.

25From thee comes my praise in the great congregation; my vows I will pay before those who fear him. 26The afflicted shall eat and be satisfied; those who seek him shall praise the LORD! May your hearts live for ever! 27All the ends of the earth shall remember and turn to the LORD; and all the families of the nations shall worship before him. 28For dominion belongs to the LORD, and he rules over the nations. 29Yea, to him shall all the proud of the earth bow down; before him shall bow all who go down to the dust, and he who cannot keep himself alive. 30Posterity shall serve him; men shall tell of the Lord to the coming generation, 31and proclaim his deliverance to a people yet unborn, that he has wrought it.

15When one of those who sat at table with him heard this, he said to him, “Blessed is he who shall eat bread in the kingdom of God!” 16But he said to him, “A man once gave a great banquet, and invited many; 17and at the time for the banquet he sent his servant to say to those who had been invited, `Come; for all is now ready.’ 18But they all alike began to make excuses. The first said to him, `I have bought a field, and I must go out and see it; I pray you, have me excused.’ 19And another said, `I have bought five yoke of oxen, and I go to examine them; I pray you, have me excused.’ 20And another said, `I have married a wife, and therefore I cannot come.’ 21So the servant came and reported this to his master. Then the householder in anger said to his servant, `Go out quickly to the streets and lanes of the city, and bring in the poor and maimed and blind and lame.’ 22And the servant said, `Sir, what you commanded has been done, and still there is room.’23And the master said to the servant, `Go out to the highways and hedges, and compel people to come in, that my house may be filled. 24For I tell you, none of those men who were invited shall taste my banquet.'”

Reflection for the day: “Wisdom is not only to perceive the natural consequence of things, but also to accept as our due the malice of those who wrong us. People who go no further than the first kind of wisdom become proud, whereas those who attain the second become humble.”-St. Mark the Ascetic