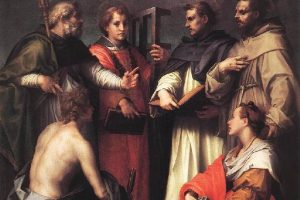 
69and has raised up a horn of salvation for us in the house of his servant David, 70as he spoke by the mouth of his holy prophets from of old, 71that we should be saved from our enemies, and from the hand of all who hate us; 72to perform the mercy promised to our fathers, and to remember his holy covenant, 73the oath which he swore to our father Abraham, 74to grant us that we, being delivered from the hand of our enemies, might serve him without fear, 75in holiness and righteousness before him all the days of our life.


5And he said to them, “Which of you who has a friend will go to him at midnight and say to him, `Friend, lend me three loaves; 6for a friend of mine has arrived on a journey, and I have nothing to set before him’; 7and he will answer from within, `Do not bother me; the door is now shut, and my children are with me in bed; I cannot get up and give you anything’? 8I tell you, though he will not get up and give him anything because he is his friend, yet because of his importunity he will rise and give him whatever he needs. 9And I tell you, Ask, and it will be given you; seek, and you will find; knock, and it will be opened to you. 10For every one who asks receives, and he who seeks finds, and to him who knocks it will be opened. 11What father among you, if his son asks for a fish, will instead of a fish give him a serpent; 12or if he asks for an egg, will give him a scorpion? 13If you then, who are evil, know how to give good gifts to your children, how much more will the heavenly Father give the Holy Spirit to those who ask him!”