Memorial of The Queenship of the Blessed Virgin Mary 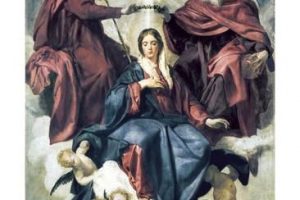 
1But there will be no gloom for her that was in anguish. In the former time he brought into contempt the land of Zeb’ulun and the land of Naph’tali, but in the latter time he will make glorious the way of the sea, the land beyond the Jordan, Galilee of the nations. 2The people who walked in darkness have seen a great light; those who dwelt in a land of deep darkness, on them has light shined. 3Thou hast multiplied the nation, thou hast increased its joy; they rejoice before thee as with joy at the harvest, as men rejoice when they divide the spoil. 4For the yoke of his burden, and the staff for his shoulder, the rod of his oppressor, thou hast broken as on the day of Mid’ian. 5For every boot of the tramping warrior in battle tumult and every garment rolled in blood will be burned as fuel for the fire. 6For to us a child is born, to us a son is given; and the government will be upon his shoulder, and his name will be called “Wonderful Counselor, Mighty God, Everlasting Father, Prince of Peace.”


26In the sixth month the angel Gabriel was sent from God to a city of Galilee named Nazareth, 27to a virgin betrothed to a man whose name was Joseph, of the house of David; and the virgin’s name was Mary. 28And he came to her and said, “Hail, full of grace, the Lord is with you!”29But she was greatly troubled at the saying, and considered in her mind what sort of greeting this might be.30And the angel said to her, “Do not be afraid, Mary, for you have found favor with God. 31And behold, you will conceive in your womb and bear a son, and you shall call his name Jesus. 32He will be great, and will be called the Son of the Most High; and the Lord God will give to him the throne of his father David, 33and he will reign over the house of Jacob for ever; and of his kingdom there will be no end.” 34And Mary said to the angel, “How shall this be, since I have no husband?” 35And the angel said to her, “The Holy Spirit will come upon you, and the power of the Most High will overshadow you; therefore the child to be born will be called holy, the Son of God. 36And behold, your kinswoman Elizabeth in her old age has also conceived a son; and this is the sixth month with her who was called barren. 37For with God nothing will be impossible.” 38And Mary said, “Behold, I am the handmaid of the Lord; let it be to me according to your word.” And the angel departed from her.

Reflection for the day: ‘Gaze not upon a maiden, lest her beauty be a stumbling block to thee.’-Ecclesiasticus 9:5