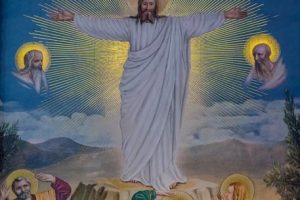 
1The word that came to Jeremiah from the LORD: 2“Thus says the LORD, the God of Israel: Write in a book all the words that I have spoken to you. 12“For thus says the LORD: Your hurt is incurable, and your wound is grievous. 13There is none to uphold your cause, no medicine for your wound, no healing for you. 14All your lovers have forgotten you; they care nothing for you; for I have dealt you the blow of an enemy, the punishment of a merciless foe, because your guilt is great, because your sins are flagrant. 15Why do you cry out over your hurt? Your pain is incurable. Because your guilt is great, because your sins are flagrant, I have done these things to you. 18“Thus says the LORD: Behold, I will restore the fortunes of the tents of Jacob, and have compassion on his dwellings; the city shall be rebuilt upon its mound, and the palace shall stand where it used to be. 19Out of them shall come songs of thanksgiving, and the voices of those who make merry. I will multiply them, and they shall not be few; I will make them honored, and they shall not be small. 20Their children shall be as they were of old, and their congregation shall be established before me; and I will punish all who oppress them. 21Their prince shall be one of themselves, their ruler shall come forth from their midst; I will make him draw near, and he shall approach me, for who would dare of himself to approach me? says the LORD. 22And you shall be my people, and I will be your God.”


15The nations will fear the name of the LORD, and all the kings of the earth thy glory. 16For the LORD will build up Zion, he will appear in his glory; 17he will regard the prayer of the destitute, and will not despise their supplication. 18Let this be recorded for a generation to come, so that a people yet unborn may praise the LORD: 19that he looked down from his holy height, from heaven the LORD looked at the earth, 20to hear the groans of the prisoners, to set free those who were doomed to die; 21that men may declare in Zion the name of the LORD, and in Jerusalem his praise, 22when peoples gather together, and kingdoms, to worship the LORD. 28The children of thy servants shall dwell secure; their posterity shall be established before thee.


22Then he made the disciples get into the boat and go before him to the other side, while he dismissed the crowds. 23And after he had dismissed the crowds, he went up on the mountain by himself to pray. When evening came, he was there alone, 24but the boat by this time was many furlongs distant from the land, beaten by the waves; for the wind was against them. 25And in the fourth watch of the night he came to them, walking on the sea. 26But when the disciples saw him walking on the sea, they were terrified, saying, “It is a ghost!” And they cried out for fear. 27But immediately he spoke to them, saying, “Take heart, it is I; have no fear.” 28And Peter answered him, “Lord, if it is you, bid me come to you on the water.” 29He said, “Come.” So Peter got out of the boat and walked on the water and came to Jesus; 30but when he saw the wind, he was afraid, and beginning to sink he cried out, “Lord, save me.” 31Jesus immediately reached out his hand and caught him, saying to him, “O man of little faith, why did you doubt?” 32And when they got into the boat, the wind ceased. 33And those in the boat worshiped him, saying, “Truly you are the Son of God.” 34And when they had crossed over, they came to land at Gennesaret. 35And when the men of that place recognized him, they sent round to all that region and brought to him all that were sick, 36and besought him that they might only touch the fringe of his garment; and as many as touched it were made well.

Reflection for the day: ‘O my dear brother in this divine Heart, were it but possible for me to reveal the infinite riches that are hidden in this precious treasure, with which He enriches and benefits His faithful friends! Could we but understand, we should spare no pains to procure Him the satisfaction He so ardently desires.’-St. Margaret Mary Alacoque