Feast of The Transfiguration of the Lord 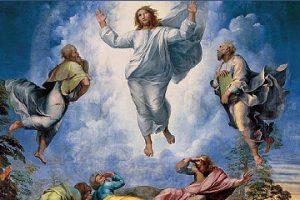 
9As I watched, Thrones were set up and the Ancient One took his throne. His clothing was snow bright, and the hair on his head as white as wool; His throne was flames of fire, with wheels of burning fire.10A surging stream of fire flowed out from where he sat; Thousands upon thousands were ministering to him, and myriads upon myriads attended him. The court was convened, and the books were opened. 13As the visions during the night continued, I saw One like a son of man coming, on the clouds of heaven; When he reached the Ancient One and was presented before him, 14He received dominion, glory, and kingship; nations and peoples of every language serve him. His dominion is an everlasting dominion that shall not be taken away, his kingship shall not be destroyed.


16For we did not follow cleverly devised myths when we made known to you the power and coming of our Lord Jesus Christ, but we were eyewitnesses of his majesty. 17For when he received honor and glory from God the Father and the voice was borne to him by the Majestic Glory, “This is my beloved Son, with whom I am well pleased,” 18we heard this voice borne from heaven, for we were with him on the holy mountain. 19And we have the prophetic word made more sure. You will do well to pay attention to this as to a lamp shining in a dark place, until the day dawns and the morning star rises in your hearts.


1The LORD reigns; let the earth rejoice; let the many coastlands be glad! 2Clouds and thick darkness are round about him; righteousness and justice are the foundation of his throne. 5The mountains melt like wax before the LORD, before the Lord of all the earth. 6The heavens proclaim his righteousness; and all the peoples behold his glory. 9For thou, O LORD, art most high over all the earth; thou art exalted far above all gods.


2And after six days Jesus took with him Peter and James and John, and led them up a high mountain apart by themselves; and he was transfigured before them, 3and his garments became glistening, intensely white, as no fuller on earth could bleach them. 4And there appeared to them Eli’jah with Moses; and they were talking to Jesus. 5And Peter said to Jesus, “Master, it is well that we are here; let us make three booths, one for you and one for Moses and one for Eli’jah.” 6For he did not know what to say, for they were exceedingly afraid. 7And a cloud overshadowed them, and a voice came out of the cloud, “This is my beloved Son; listen to him.” 8And suddenly looking around they no longer saw any one with them but Jesus only. 9And as they were coming down the mountain, he charged them to tell no one what they had seen, until the Son of man should have risen from the dead. 10So they kept the matter to themselves, questioning what the rising from the dead meant.

Reflection for the day: ‘She was without the taste of devotion to such an extent that everything seemed beyond her, and many years passed before she could recover the taste for prayer.’ -St. Catherine of Bologna