Votive Mass of the Sacred Heart 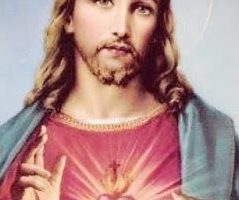 
1In the beginning of the reign of Jehoi’akim the son of Josi’ah, king of Judah, this word came from the LORD, 2“Thus says the LORD: Stand in the court of the LORD’s house, and speak to all the cities of Judah which come to worship in the house of the LORD all the words that I command you to speak to them; do not hold back a word. 3It may be they will listen, and every one turn from his evil way, that I may repent of the evil which I intend to do to them because of their evil doings. 4You shall say to them, `Thus says the LORD: If you will not listen to me, to walk in my law which I have set before you, 5and to heed the words of my servants the prophets whom I send to you urgently, though you have not heeded, 6then I will make this house like Shiloh, and I will make this city a curse for all the nations of the earth.'” 7The priests and the prophets and all the people heard Jeremiah speaking these words in the house of the LORD. 8And when Jeremiah had finished speaking all that the LORD had commanded him to speak to all the people, then the priests and the prophets and all the people laid hold of him, saying, “You shall die! 9Why have you prophesied in the name of the LORD, saying, `This house shall be like Shiloh, and this city shall be desolate, without inhabitant’?” And all the people gathered about Jeremiah in the house of the LORD.


4More in number than the hairs of my head are those who hate me without cause; mighty are those who would destroy me, those who attack me with lies. What I did not steal must I now restore? 7For it is for thy sake that I have borne reproach, that shame has covered my face. 8I have become a stranger to my brethren, an alien to my mother’s sons. 9For zeal for thy house has consumed me, and the insults of those who insult thee have fallen on me. 13But as for me, my prayer is to thee, O LORD. At an acceptable time, O God, in the abundance of thy steadfast love answer me. With thy faithful help


54and coming to his own country he taught them in their synagogue, so that they were astonished, and said, “Where did this man get this wisdom and these mighty works? 55Is not this the carpenter’s son? Is not his mother called Mary? And are not his brothers James and Joseph and Simon and Judas? 56And are not all his sisters with us? Where then did this man get all this?” 57And they took offense at him. But Jesus said to them, “A prophet is not without honor except in his own country and in his own house.” 58And he did not do many mighty works there, because of their unbelief.

Reflection for the day: ‘Patiently endure the distressing and painful things that befall you, for through them God in His providence is purifying you.’-St. Thalassios the Libyan