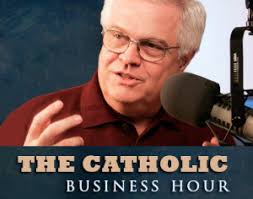 Chris Lowney to be on The Catholic Business Hour Radio Show

This Saturday’s guest on The Catholic Business Hour, with host Dick Lyles, is Chris Lowney, a former Jesuit seminarian who was named a managing director of J.P. Morgan & Co. while still in his thirties and who held senior positions in New York, Tokyo, Singapore and London until leaving the firm in 2001.  He served successively on Morgan’s Asia-Pacific, Europe, and Investment Banking Management Committees.

Mr. Lowney’s first book, Heroic Leadership: Best Practices from a 450-Year-Old Company that Changed the World, was the #1 ranked bestseller of the CBPA and was named a finalist for a 2003 Book of the Year Award from ForeWord magazine. It has been translated into 10 languages; Mr. Lowney has presented its principles in numerous U.S. cities and in non-U.S. locations as diverse as Indonesia, Venezuela, the Philippines, Spain, and Chile.

His second book, A Vanished World: Medieval Spain’s Golden Age of Enlightenment was nominated for La Coronica award. In a starred review, Publishers Weekly said, “This bold and compassionate articulation of medieval Spanish history, with its complex interactions among Jews, Muslims and Christians, speaks directly to contemporary international crises…This engrossing and illuminating book deserves the attention of a wide public.” Mr. Lowney appeared in the PBS-aired documentary, Cities of Light, which echoed many of the book’s key themes.

Mr. Lowney’s just-published new book, Heroic Living: Discover Your Purpose and Change the World, is a life strategy that marries age-old spiritual wisdom to the best modern management ideas. One reviewer writes: “Chris Lowney’s most recent book is a substantive blend of ‘why’ and ‘how’ to construct a life of purpose and integrity amidst the exigencies and complexities of our fast-paced daily lives.”

In 2006, Chris undertook (but could not complete due to illness) a 500-mile walking pilgrimage to Santiago de Compostela to raise money for “Pilgrimage for Our Children’s Future,” a non-profit organization (www.pocf.org) which has enabled education opportunities for heroic young children such as AIDS orphans in Nairobi slums and children raised in the shadow of the Philippines’ largest garbage dump.

Raised and living in New York, you can visit Mr. Lowney’s website at www.chrislowney.com.