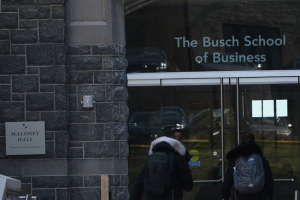 Human Dignity and the Purpose of Capitalism

In a recent First Things article titled “What is Economics For,” Senator Marco Rubio explains how the teachings of the Catholic Church on the dignity of work and workers can rebuild the American economy.

Rubio begins his article by quoting Pope Leo XIII’s Rerum Novarum: “Work and working people have a fundamental dignity that all societies are bound to respect and serve.”

Senator Rubio goes on to point out that, “in the American tradition, private business enterprise is the main institution the public has entrusted with providing dignified work.”

If you live near the Catholic University of America, you might want to attend the Busch School of Business sponsored CEO Lecture Series on Tuesday morning, November 5, 2019, from 9:30 to 10:25 am, in the Della Ratta Auditorium, Maloney Hall to hear Senator Marco Rubio on “Human Dignity and the Purpose of Capitalism.”

The event is free and open to the public.

If you are unable to attend, consider watching the Livestream here, which is slated to begin on Tuesday, November 5, at 9:30 am.