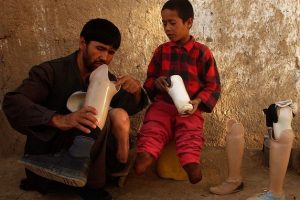 America Quiet on the Execution of Afghan Christian Said Musa

Hudson Institute — A terrible drama is unfolding in Afghanistan: There are reports that Said Musa, whose situation I described at Christmas, will soon be executed for the ‘crime’ of choosing to become a Christian. (For background, see here.)

Musa was one of about 25 Christians arrested on May 31, 2010, after a May 27 Noorin TV program showed video of a worship service held by indigenous Afghan Christians; he was arrested as he attempted to seek asylum at the German embassy. He converted to Christianity eight years ago, is the father of six young children, had a leg amputated after he stepped on a landmine while serving in the Afghan Army, and now has a prosthetic leg. His oldest child is eight and one is disabled (she cannot speak). He worked for the Red Cross/Red Crescent as an adviser to other amputees.
He was forced to appear before a judge without any legal counsel and without knowledge of the charges against him.
“Nobody [wanted to be my] defender before the court. When I said ‘I am a Christian man,’ he [a potential lawyer] immediately spat on me and abused me and mocked me. . . . I am alone between 400 [people with] terrible values in the jail, like a sheep.” He has been beaten, mocked, and subjected to sleep deprivation and sexual abuse while in prison. No Afghan lawyer will defend him and authorities denied him access to a foreign lawyer.
Any and every human being who is imprisoned, abused, or tortured for the free and peaceful expression of their faith deserves our support, but Musa is also a remarkable person and Christian. In a letter smuggled to the West, he says, “The authority and prisoners in jail did many bad behaviour with me about my faith in the Lord Jesus Christ. For example, they did sexual things with me, beat me by wood, by hands, by legs, put some things on my head.”
He added a thing much more important to him, that they “mocked me ‘he’s Jesus Christ,’ spat on me, nobody let me for sleep night and day. . . . Please, please, for the sake of Lord Jesus Christ help me.” (View the full letter here)
He has not, in fact, even appealed to be released, only to be transferred to another prison. He has also stated that he is willing to give his life for his faith. “Please, please you should transfer me from this jail to a jail that supervises the believers. . . . I also agree . . . to sacrifice my life in public [where] I will tell [about my] faith in Lord Jesus Christ, son of God, [so] other believers will take courage and be strong in their faith.”
Newspapers in the U.K. and elsewhere in Europe have reported the story, but with, the exception of the Wall Street Journal and, of course, NRO, American outlets have not found it worthy of attention. The Journal reports that “Afghan officials have been unapologetic: ‘The sentence for a convert is death and there is no exception,’ said Jamal Khan, chief of staff at the Ministry of Justice. ‘They must be sentenced to death to serve as a lesson for others.’”
The U.S. government — reportedly including Secretary of State Clinton — and other governments have pushed for his release, but to no avail.
But the president has been silent, even as we fight a war that has among its goals the creation of a government that conforms to international human-rights standards.
An American president certainly needs to guard and shepherd his political capital, and should not speak out about every prisoner. But Musa himself has appealed to “President Brother Obama” to rescue him from his current jail. And when an obscure and aberrant Florida pastor, Terry Jones, threatened to burn…. Read more>>

——————
Paul Marshall is the co-author, with Nina Shea, of Silenced: How Apostasy and Blasphemy Codes Are Choking Freedom Worldwide, forthcoming from Oxford University Press in October 2011.