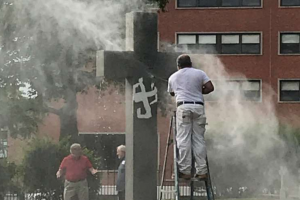 CNA—A man has been arrested and charged with vandalism and assault after  swastikas were painted on the graves of several Dominican friars and a security guard was assaulted at Catholic college on Monday evening.

A statement from Fr. Brian J. Shanley, O.P., and Fr. Kenneth Sicard, O.P., the president and president-elect of Providence College, Rhode Island, said that around 9:30 p.m. on Monday, public safety officers were alerted to the presence of a “suspicious man” at the on-campus cemetery. The cemetery contains the gravesites of deceased Dominican friars who taught at the school.

“Officers approached the individual to question what he was doing and to confirm the vandalism when they noticed the suspect had painted swastikas and anti-Catholic language on the cemetery’s central cross and on several of the headstones, and was actively burning American flags that stood at some of the gravesites,” said the statement from Shanley and Sicard.

Terrible vandalism, hate crimes against Catholics and against human respect

In total, seven headstones were defaced, along with the central cross in the cemetery.

The man proceeded to hit the security officer in the head and run away. He was later discovered hiding in bushes on campus, where he was subsequently arrested.

The paint was removed by Tuesday afternoon.

“We loudly and unequivocally condemn this racist, anti-Semitic, and anti-Catholic action, and the desecration of the gravestones of our beloved, deceased Dominicans who served Providence College so well and so faithfully for many years,” said the statement.

“In addition, we condemn this action in support and solidarity with the Jewish members of our community, many of whom enjoyed the friendship of those late Dominican friars. PC has a long and proud history of collaboration with the Jewish community in Rhode Island,” they added.

Providence College is home to the Jewish-Catholic Theological Exchange, and regularly hosts events aimed at interreligious dialogue and friendship.

“Our community embraces love and mutual respect for all people; there is no place for hatred on our campus,” said Shanley and Sicard.

Providence Police Department identified the man on Tuesday as 26-year-old Keveon Gomera. Gomera was charged with vandalism and assault with intent to commit a felony.

A man who believes he encountered Gomera before the assault told local NBC affiliate WJAR that Gomera was carrying a bucket of paint and accused Providence College of “being part of the slave plantations” and said he was going to light an American flag on fire.

Providence College was founded in 1917, several decades after the Emancipation Proclamation, and nearly a century after the abolition of slavery in Rhode Island.