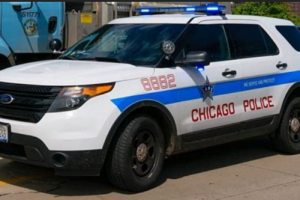 faithwire—A pastor in Chicago said he was in the middle of delivering a sermon when armed police officers began banging on the doors of his sanctuary.

The cops were sent by Democratic Mayor Lori Lightfoot, who said in early May she was “watching” and ready to arrest and jail anyone going to a “large or small” gathering in a home. She sent the officers to Cornerstone Baptist Church in unmarked cars, according to Pastor Courtney Lewis.

“Like the Soviet-styled KGB, they knocked on our locked doors,” he wrote in a letter of grievance to U.S. Attorney John Lausch. “The only thing she hasn’t done yet is beat the doors down and arrest our members.”

“Thankfully, our doors were locked as a normal safety precaution we take each service to protect our members from the escalating gun violence in Chicago,” the Chicagoland pastor continued. “Mayor Lightfoot is defiant of the U.S. Constitution and our freedom to worship.”

Philanise White, a Republican from Illinois running for U.S. Congress, defended Lewis against the “attack” from Lightfoot.

During a recent interview with conservative radio host Todd Starnes, Lewis said his congregation has complied with every coronavirus-induced restriction. He initially moved services online, then hosted outdoor services only, and is now holding small indoor gatherings while following social distancing guidelines and taking the temperatures of every attender before they enter the sanctuary. He has also barred elderly members from attending in-person services, as they are at higher risk of developing potentially fatal complications from the coronavirus.

The Cornerstone preacher is also requesting help from President Donald Trump and the U.S. Department of Justice to correct “the grave miscarriage of the law.”

For her part, Lightfoot is requesting churches hold off on hosting in-person services until she slowly begins to reopen the city in June. The mayor’s request comes as more churches across Chicago are defying her orders.

The state’s “Restore Illinois” plan states religious services of 10 people or fewer are permitted. Gatherings of 50 people or fewer banned until the fourth phase of the restoration process.