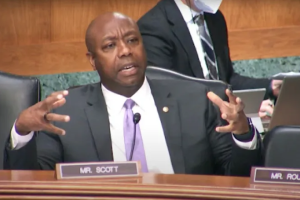 “I’ll just simply say that, as a guy raised by a Black woman in abject poverty, I am thankful to be here as a United States senator,” Sen. Tim Scott of South Carolina  said Tuesday.

He made his comments during a May 10 hearing held by the U.S. Senate Committee on Banking, Housing, and Urban Affairs. At the hearing, Yellen testified as a witness and claimed that abortion enables women to succeed in the workforce.

“I believe that eliminating the right of women to make a decision about when and whether to have children would have very damaging effects on the economy and would set women back decades,” she said. “Roe v. Wade and access to reproductive health care, including abortion, helped lead to increased labor force participation.”

Studies show that “denying women access to abortion increase their odds of living in poverty or need for public assistance,” Yellen added.

At a later point in the hearing, Scott asked her to clarify.

“Did you say that ending the life of a child is good for the labor force participation rate?”

“Did you say that ending the life of a child is good for the labor force participation rate?” he asked. (see video clip below)

The increased labor force participation rate, according to the U.S. Bureau of Labor Statistics, is the percentage of the population that is either working or actively looking for work.

“To the guy who was raised by a single mom who worked long hours to keep us out of poverty — I think people can disagree on the issue of being pro-life or pro-abortion — but, in the end, I think framing it in the context of labor force participation is, just feels callous to me,” he added. “I think finding a way to have a debate around abortion in a meeting for the economic stability of our country is harsh.”

Yellen replied that she did not intend to come across as harsh.

“In many cases, abortions are of teenage women, particularly low-income and often Black, who aren’t in a position to be able to care for children, have unexpected pregnancies, and it deprives them of the ability often to continue their education to later participate in the work force,” she said. “So there is a spillover into labor force participation. And it means that children will grow up in poverty and do worse themselves.”

The American Dream is one of hope and opportunity.

Abortion is not a solution to poverty

Scott responded that “there’s a lot of ways for us to address the issue about the child that’s here.”

At the end of the hearing, Scott stressed that millions of children face circumstances similar to his: being raised in poverty by single-parent households that are Black.

The American Dream is one of hope and opportunity. We should be having conversations about economic policies that ensure everyone—including single moms and their kids—have access to that dream. Sec. Yellen’s comments today don’t meet that mark. pic.twitter.com/DqumCuggHs

“Telling Black teenage moms that there’s only one alternative for them is a depressing and challenge message,” he said. “What I’m talking about is the importance of understanding the reality that even during tough financial times in households like the one I was raised, there is still hope.”

He ended, “I’m simply saying that the experience of so many of us, millions of us, in poverty, I conclude is a reason to be hopeful about what’s possible even for those incredibly powerful positive women making really hard choices.”

The argument that women rely on abortion to succeed economically is a common one made by abortion supporters. An amicus brief submitted by hundreds of professional women in Dobbs v. Jackson, the case that could overturn Roe, argues that, instead, abortion harms women.