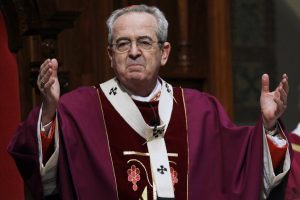 WASHINGTON, D.C. (Zenit.org)—The chairman of the U.S. bishops’ conference pro-life committee is inviting people to spend a day with a child and learn the lessons God teaches through him or her.

Cardinal Justin Rigali of Philadelphia, Pennsylvania, affirmed this in a statement released for Respect Life Sunday, which will take place this weekend.Sunday’s celebration will focus on the theme, “Every Child Brings Us God’s Smile.”

The cardinal highlighted his country’s current debate over health care reform, and the relevant life issues enveloped in this conversation.

He pointed out that “a number of Americans believe that the lives and health of only some people are worth safeguarding,” an attitude that he called “deplorable.”

“Despite the opposition of 67% of Americans to taxpayer-funded abortion,” the prelate stated, “all current health care proposals being considered by Congress would allow or mandate abortion funding.”

“Abortion — the direct, intentional killing of an unborn girl or boy — is not health care,” he asserted.

The cardinal denounced the view of population control advocates and some environmentalists who posit that “the neglect, and even the death, of some people” is “a solution to rising health care costs.”

He stated: “Death is not a solution to life’s problems. Only those who are blind to the transcendent reality and meaning of human life could support killing human beings to mitigate economic, social or environmental problems.”

Cardinal Rigali continued, “The antidote to such myopia is to recover an appreciation for the sanctity and dignity of each unique human being.”

He invited his audience to spend a day with a young child, to discover the “wellspring of joy and giggles,” and capacity of “daring leaps of imagination, probing curiosity, and even reasoned — though sometimes self-centered — appeals for justice.”

The prelate affirmed: “Children delight in God’s creation and love their family unconditionally. God gave every human being these marvelous aptitudes, and children can help us recover and appreciate them anew.”

He denounced the current “cultural hostility to children” and stated that “eliminating our young does not solve problems,” but rather adds to them.

“Children,” the prelate concluded, “and those who are dependent on us due to disability or age, offer us the opportunity to grow in patience, kindness and love.”