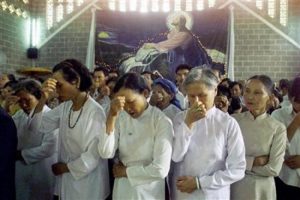 In this age of globalization and a lack of regard (to put it mildly) for the dignity of the human person and lack of respect for the unborn and elderly, each person individually created in God’s own image and each one destined for fulfillment only in Him, it seems to us important for Catholic business professionals to be aware and prayerful regarding our fellow Catholics — many of them business professionals as well — who are greatly suffering due to government intrusion and a lack of religious liberty around the world.  Hence, this update regarding our Vietnamese brethern. —ed.

HANOI, Vietnam, (Zenit.org)—A blogger protesting how the Vietnamese government distorted Benedict XVI’s address to bishops of the nation has been arrested. Bui Thanh Hieu, a catechumen blogger defending the Church in Vietnam, was arrested last Thursday, VietCatholic News reported. It claimed others face the same risk of arrest for their “swift reactions against the distortion of Pope Benedict XVI’s speech to Vietnamese bishops on their [June 27] ad limina visit.”

On Aug. 24, Vietnam Net, a state media outlet, published an article titled “A Good Catholic Is a Good Citizen,” citing Benedict XVI in such a way that it gave the idea that the Pope himself had “insulted the Church in Vietnam” for “spiritual corruption,” Father Joseph Nguyen of Hanoi told AsiaNews. “It has cast shadows of sadness among Catholics,” he lamented. “We all know that His Holiness Benedict XVI did not mean that.”

The government article goes on to allege that the Holy Father knows of a group of Catholics trying to “overthrow the government.” The next day, the article was re-published by other newspapers with calls for the arrest of priests of Thai Ha and Vinh. That region has been the site of conflict between the Church and the government over the confiscation of Church property.

“The manipulation of Pope Benedict XVI’s address has created a lot of frustration among Catholics in Vietnam, who, through the blogs, have begun to voice their opinions, criticizing the media under state control,” AsiaNews affirmed. It added that the blogs have published the original text of the papal address.