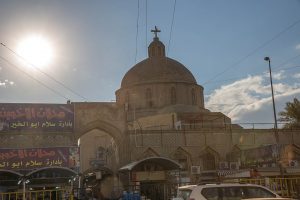 Unbeknownst to many it seems, there are less than 420,000 Chaldean Catholics in Iraq, which equals 1.7 percent of Iraq’s total population. The Church in Iraq has suffered greatly at the hands of radical Islamic violence including the murder of priests such as Father Ragheed Aziz Ganni and two subdeacons on June 3, 2007 and the blatant kidnapping of Archbishop Paulos Faraj Rahho and three companions who were abducted on February 29, 2008, in Mosul, Iraq, and brutally murdered few days later.

In spite of threats and discrimination among radical muslims, Chaldean Catholics in Iraq continue to live their Catholic faith with unflinching heroism, as evidenced in the following news story… —ed.


(Baghdad, Iraq, Dec 7, 2009 / 07:19 pm (CNA).- Chaldean Catholic religious sisters will distribute Christmas food parcels to impoverished people in the northern Iraq town of Zakho near the Syrian/Turkish border, the Catholic charity Aid to the Church in Need (ACN) says. The sisters will use a van packed full of cheese, tinned meat, powdered milk, cooking oil, salt, sugar, soap and other urgent items as part of their outreach in and around Zakho, ACN exlpains.

Immense hardship and poverty have been reported in the Kurdish north of Iraq.

ACN provided about $37,000 for the Christmas mercy mission as part of its own effort to support persecuted and suffering Christians. It is the third aid package of its kind since the initiative began last Christmas. It is expected to benefit thousands of people, especially the elderly, the disabled and others with special needs.

ACN Iraq projects coordinator Marie-Ange Siebrecht recently returned from a visit to the region. She reported that the sisters are “very much appreciated for their work.”

“What they are doing will give many people a real boost this Christmas and remind them that they are not alone – that their brothers and sisters in faith elsewhere are thinking about them and trying to help,” she commented.

The aid is part of ACN’s commitment to the ancient Christian community in a region whose Christian population has dropped from one million in 2003 to less than 350,000 today.

The exiled Christian population is also in need of aid. In the spring, the charity gave about $30,000 to Iraqi Christians in Syria who are desperate for help. They are living in very basic accommodations, mostly in and around the capital Damascus.

Other ACN projects support refugees in Jordan and Turkey.