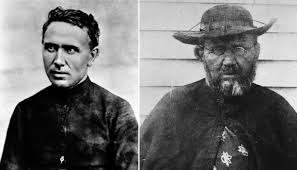 In his homily the Holy Father outlined certain aspects of the personality of the new saints, and the causes for their canonization.

“‘Come, follow me!’ This is the Christian vocation that flows from a proposal of love by the Lord, and that can be fulfilled only if we reply in love”, Pope Benedict XVI said. “The saints welcome this demanding invitation. … Their perfection, in the logic of a faith that is at times humanly incomprehensible, consists in no longer placing themselves at the center, but choosing to go against the tide and live according to the Gospel. This is what was done by the five saints who today, with great joy, are being put forward for veneration by the Universal Church: Zygmunt Szczesny Felinski, Francesc Coll y Guitart, Jozef Damian de Veuster, Rafael Arnaiz Baron and Mary of the Cross Jugan (nee Jeanne).

Zygmunt Szczesny Felinski, archbishop of Warsaw, “was a great witness of faith and pastoral charity in very difficult times for the nation and for the Church in Poland”, said the Holy Father. “Prior to the insurrection of January 1863 against the Russian annexation, he warned the people against futile bloodshed. However, when the uprising occurred and was put down, he courageously defended the oppressed. Under the rule of the Russian Czar he spent 20 years in exile in Jaroslaw in Siberia, and was never able to return to his diocese. In all situations he maintained his unshakeable trust in Divine Providence.“

Francesc Coll y Guitart’s “passion was preaching, mostly itinerant preaching following the form of ‘popular missions,‘ with the goal of proclaiming and reviving the Word of God in the villages and towns of Catalonia, thus leading people to the profound encounter with the Lord. … His evangelizing activity included great devotion to the Sacrament of Penance, a prominent emphasis on the Eucharist and a constant insistence on prayer.”

The missionary activity of Jozef de Veuster, who took the name Damian, “reached its apex in charity. Not without fear and repugnance, he chose to go to the Island of Molokai to serve the lepers abandoned there, thus exposing himself to the disease. … This servant of the Word thus became a suffering servant, a leper among lepers during the last four years of his life. … St. Damien leads us to choose the good fight, not the fights that lead to division, but those that bring people together. He invites us to open our eyes to the forms of leprosy that disfigure the humanity of our fellows and calls, more than for our generosity, for the charity of our serving presence”.

Rafael Arnaiz Baron “said ‘yes’ to the proposal to follow Jesus, in an immediate and decisive way, without limits or conditions. … Brother Rafael remains close to us and, through his example and his works, continues to offer an enticing proposal, especially for young people who are not easily satisfied, but who aspire to the fullness of truth”.

“Through her admirable work in the service of poor elderly people, Mary of the Cross is like a beacon guiding our societies, which must always rediscover the place and unique contribution of this period of life. … Her charism remains relevant as so many elderly people suffer different forms of poverty and solitude, sometimes even abandoned by their families. … For the elderly, may St. Jeanne Jugan be a living source of hope and, for the people generously placing committed to serving them, a powerful stimulus to pursue and develop her work”.

Benedict XVI concluded his homily by calling on everyone “to let yourselves be drawn by the shining example of these saints, allow yourselves to be guided by their teachings, so that our whole lives may become a hymn of praise to the love of God”. Beatification is the first step to possible sainthood. The Vatican must certify one miracle attributed to the candidate’s intercession for beatification, and a second miracle that occurred after beatification for the candidate to be declared a saint.