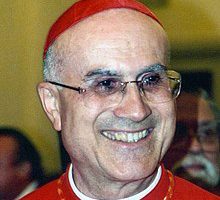 ROME, SEPT. 30, 2008 (Zenit.org)—Politics needs Christianity and it is therefore totally legitimate for believers to participate in the public square, says Benedict XVI’s secretary of state. Cardinal Tarcisio Bertone (pictured above) affirmed this today in Rome when he spoke at a conference titled “The Century of Beliefs,” on the occasion of a presentation of the latest issue of the review “Aspenia,” an international political quarterly from the Aspen Institute Italia.

In response to the question on the relation of politics and religion in the global era, Cardinal Bertone said that in the review’s various articles he detected “a certain convergence on the fact that, in the era of globalization, politics and the market aren’t everything; they are a means, not an end.”

“I have never agreed with those who hold that politics is useless, because it promises to build bridges even where there is no river. Instead, I am convinced that politics is necessary, but I believe that, to communicate genuine values, it must respect the ‘bridge’ that unites each of these values with God,” he explained.

The cardinal said that without God, politics begins to lose the ability to respect law and recognize the common good. This is confirmed by “the tragic end of all political ideologies” and even by the “present financial crisis,” the Vatican official said. “Wherever one’s own benefit is sought in the short term, virtually identifying that with the good, one ends up by canceling one’s own benefit.”

Secular ethics Cardinal Bertone acknowledged that a secular ethics does exist, that is, one that is not linked to transcendence. He said that such an ethics “deserves attention and respect as it often contributes to the common good.” However, the cardinal continued, without being inspired in transcendence, it runs the risk of failing by “being increasingly exposed to human frailties and doubt.”

In that regard, Cardinal Bertone noted that in modern times, the inviolable rights of the person are proclaimed with particular emphasis. Nevertheless, in reality, these rights are often tragically denied. Moreover, “in the present multi-ethnic and multi-confessional societies, religions constitutes an important factor of cohesion, and the Christian religion in particular, with its universalism, invites to dialogue, to openness and to harmonious collaboration.”

It is far from being the “opium of the people,” he added.

According to Cardinal Bertone, in order “to direct globalization, politics not only needs an ethics inspired in religion, but a religion that is rational. Because of this, politics also needs Christianity.”

Human nature Therefore, the cardinal stressed that it is “totally legitimate” for Christians “to participate in the public debate. If not, theist and religious arguments and reasoning could not be invoked publicly in a democratic and liberal society, while rationalist and secular arguments could be invoked — clearly violating the principle of equality and reciprocity, which is at the base of the concept of political justice.”

However, Cardinal Bertone clarified, Christianity promotes values that do not need to be labeled “Catholic” and thus held only by a certain few. Instead, he said, “the truth of these values lies in their correspondence with the nature of man and, hence, with his truth and dignity.”

Therefore, “those who uphold them do not seek to establish a confessional regime, but are simply conscious of the fact that legality finds its ultimate root in morality.” And this morality, the cardinal clarified, cannot fail to respect human nature.

From this derives the “non-negotiable” character of principles, which “does not depend on the Church” but is based on human nature itself. In light of this, the frequency of the Church’s interventions in defense of non-negotiable values “must not be interpreted as undue influence in a realm that is not her own,” but as “an aid in developing a correct and enlightened conscience […] a conscience that is more free and responsible.”

“The Church does not seek applause or popularity, because Christ sent her to the world ‘to serve’ and not ‘to be served,'” the cardinal concluded. “She does not wish to ‘win at all costs’ but to ‘convince,’ or at least to ‘alert’ the faithful and all people of good will about the risks that man runs when he moves away from the truth about himself.”