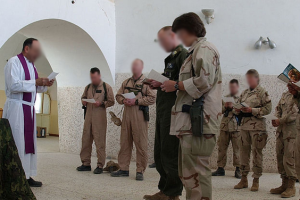 My godson is a parish priest. He is also military chaplain.

In May of this year, he was called out of reserves to serve as the only Catholic chaplain (and perhaps the only chaplain) in the Middle East.

He is assigned to bring the Sacraments—Holy Mass, Confession/Reconciliation, as well as spiritual listening and counseling, whatever is needed— to our U.S. military stationed in the Middle East.

Already he has been taken to many places, where he stays just three or four days, and where his presence is so welcomed and appreciated by the soldiers serving in these Middle East locations.

Those of us stateside are already on our knees for my godson’s safety and in prayer that God’s mission for him, for souls, is blessed and abundant.

Now, with the Biden’s abrupt withdrawal of troops and the swift, chaotic, devastating Fall of Afghanistan into the hands of Taliban terrorists, you can imagine our prayers have increased.

What about the small number of Catholics in Afghanistan?

Aside from any military who may be Catholic serving in Afghanistan or the Middle East region, what about those Catholics who live in the mostly Muslim country?

CNA reports that a group of nuns who run a charity for children in Kabul, the now fallen capital city of Afghanistan, are safe… for the moment.

For the Children of Kabul is an Italian association of priests and religious from different congregations, and they run a free day center in Kabul for children with mental disabilities, employing Afghan women as staff and teachers.

The sisters also run a scholarship program to help young Afghan women study, and they provide necessities to nearby families.

Founded in 2004, For the Children of Kabul takes its name from St. Pope John Paul II’s appeal to save the children of Afghanistan during his Christmas Day blessing in 2001.

“We are in constant contact with the sisters present there and we pray for them. I can tell you that they are fine and that all channels have been activated so that they are safe,” Fr. Matteo Sanavio told CNA via email from Rome.

Sanavio said he could not give more information about the sisters’ situation at this time due to security concerns.

Two Jesuit priests from India and four sisters of the Missionaries of Charity are also in Kabul.

According to UCA News, the Jesuits have suspended their mission in Afghanistan indefinitely and the two Indian priests are waiting to be evacuated to their country.

There is a single Catholic Church, located in the Italian embassy in Kabul, which is operated under the Catholic mission sui juris of Afghanistan. In 2018, there were an estimated 200 Catholics in the country, many of them foreigners working in embassies.

St. Pope John Paul II erected the Catholic mission territory in May 2002. Its superior is Italian Fr. Giovanni M. Scalese, a priest of the Barnabite religious order. He has led the Catholic Church in Afghanistan since January 2015.

Scalese, reached by phone on Aug. 17, declined to comment on the current situation due to safety concerns.

Caritas Italiana, a Catholic charity working in Afghanistan, said in a statement over the weekend that the instability of the situation was causing fears to grow “about the possibility of maintaining a presence even in the future, as well as for the safety of the few Afghans of Christian belief.”

The Catholic Sant’Egidio community called on the European community on Tuesday to provide refuge for Afghans attempting to flee the country and to not deport Afghans seeking asylum in Europe back to Afghanistan.

“Europe must act to guarantee the protection of those fleeing Afghanistan reconquered by the Taliban,” the community said in a statement co-signed by the Federation of Evangelical Churches and the representative body of the Waldensian and Methodists in Italy.

“In these hours, thousands of men, women and children risk their lives simply for believing in the values ​​of democracy, freedom to express themselves and to study,” the groups said.

At the end of July, two Catholic sisters of For the Children of Kabul in Afghanistan spoke to the Italian magazine Mondo e Missione. The sisters said they were “very worried about the near future.”

“We live day by day, with serenity,” Sr. Shahnaz Bhatti from Pakistan and Sr. Teresia Crasta from India told the magazine.

“Our families are worried about us: every time they see the image of some attack on TV they fear for our safety,” they added. “But we sleep peacefully, here we have many friends and for the rest we entrust ourselves to God.”

The two sisters, who expected a third sister to arrive in Afghanistan in early August, operate a school for 50 kids ages 6 to 12 with mild intellectual disabilities such as Down syndrome.

Sanavio, the association’s president, told CNA Aug. 17 that the day center has faced many closures over the past year due to the COVID-19 pandemic, and had only re-opened “with difficulty” a few weeks ago.

“But now, for security reasons, it has had to close again,” he said. “The children all have their families and are safe.”

“This is a wounded country, violence is the rule here and life is worth nothing. The blood still flows in the streets as if it were water,” explained one of the Catholic sisters in the earlier-cited magazine interview.

In the words of one secret Christian believer in Afghanistan

OpenDoorsUK—It is impossible to live openly as a Christian in Afghanistan. Leaving Islam is considered shameful, and Christian converts face dire consequences if their new faith is discovered. Either they have to flee the country or they will be killed.

If a Christian’s family discovers they have converted, their family, clan or tribe has to save its ‘honour’ by disowning the believer, or even killing them. Christians from a Muslim background can also be sectioned in a psychiatric hospital, because leaving Islam is considered a sign of insanity.

“How we survive daily only God knows. He knows because He has been kind to dwell with us. But we are tired of all the death around us.”

As of August 2021, the Taliban are now in control of Afghanistan.

Thousands of families are fleeing their homes amid intensified extremist offensives. According to the U.N. Office for the Coordination of Humanitarian Affairs (OCHA), as of May 21, about 100,000 people had been displaced by conflict in Afghanistan this year. Since then, the numbers have more than doubled.

Afghanistan remains the second-highest country on the World Watch List.

Open Doors stands with the small community of believers inside Afghanistan and we’re calling for urgent prayer on their behalf.

With the ongoing effects of civil war, the expansion of extremism, food shortages and the raging pandemic – as well as the Taliban takeover – Afghanistan needs urgent prayer from the global church right now more than ever.

Many of these believers have been forced to flee and leave everything they own to find safety in an already unstable and dangerous situation. Join us in prayer today for our brothers and sisters caught in the crossfire in Afghanistan.

In the words of one secret Afghan believer: “How we survive daily only God knows. He knows because He has been kind to dwell with us. But we are tired of all the death around us.”

Sources for this story include:  CNA and its Rome Newsroom writer Hannah Brockhaus, and Open Doors UK.  Photo: December 23, 2001-Mass on military base, for military personnel, in Afghanistan, faces blurred by CBJ for potential security reasons.