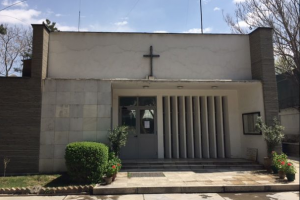 The Only Catholic parish in Afghanistan

Aug 16, 2021—Ambasciata d’Italia Kabul—The possibility to host a Catholic Chaplain within the Italian “legation” was provided by “The Agreement between Italy and Afghanistan to exchange permanent diplomatic missions” in 1921. King “Amanullah”, [who was] grateful to Italy for being the first western country to recognize formally the independence of Afghanistan, [and who] showed himself sensitive to the demand of the Catholics that were then present in the country and [who] were asking for the spiritual assistance of a priest.

Since the Arab conquest of Persia and Central Asia in the seventh century A.D. , it was the first time that a Muslim government authorized the official establishment of a Catholic presence in Afghanistan, although prohibiting proselytism.

For this delicate task, Pope Pius XI chose the Barnabite Father Egidio Caspani, a historian and a language scholar.

After a month-long adventurous journey, Father Caspani arrived in Kabul on Christmas afternoon in 1932 being able to finally celebrate the first Mass on January 1st, 1933.

The present chapel was built in 1960: works officially started on 15 August, during the mandate of the Ambassador Folco Trabalza; the inauguration was held on the following 18 December, with the participation of Archbishop Vittore Ugo Righi, Apostolic Nuncio in Teheran.

None of the various regimes or political-military upheavals that characterized the Afghan History (the monarchy in its diverse aspects, the republic established by Daoud, the communist regime, the soviet invasion, the Mujahideen’s reconquest, the civil war, the Islamic Emirate of the Taliban) has ever led to the expulsion of the Catholic Mission, which, furthermore, was praised by the Afghan Ministry of Foreign Affairs for its constant and tenacious presence during those difficult years.

In 2002, Pope John Paul II established the Independent Mission of Afghanistan (Missio sui iuris Afghanistaniensis), naming the chaplain of the Italian Embassy as Ecclesiastical Superior of the Mission with the function of local Ordinary for Catholics temporarily residing in the country.

Currently, the Mission is led by Father Giovanni Scalese.