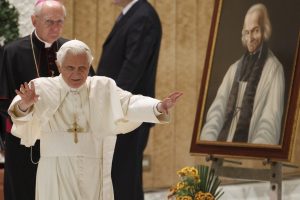 Why a Year for Priests?

VATICAN CITY (Zenit.org)—The priesthood is a gift for humanity, but it is enduring more than a few difficulties, and the newly inaugurated Year for Priests aims to address that, says a Vatican spokesman.

Jesuit Father Federico Lombardi, director of the Vatican press office, spoke of the Year for Priests during the most recent edition of Vatican Television’s “Octava Dies.” “The priest’s service is of fundamental importance in the life of the Church,” he said. “But it is a mystery that today endures not just a few difficulties.”

Father Lombardi affirmed that the Year for Priests, which began Friday and runs through next June, responds to struggles caused by various factors: “the general climate of secularization in vast regions of the world, a lessened appreciation for the role of the priest in society, the deep wounds inflicted on the public image of priests due to unworthy behavior by some of them, and even the worthy valuing of the lay vocation in the Church.”

Faced with these difficulties, the spokesman continued, “the Pope does not respond with socio-religious considerations, but by promoting a commitment to interior renewal on the part of all priests, so that their Gospel testimony in the world of today is more intense and weighty.”

Benedict XVI’s letter to priests, with which he inaugurated the year, “does not begin from the external, but from the heart of the priestly vocation, from the concrete model of priestly sanctity that is offered us by the holy Curé d’Ars, St. John Vianney,” Father Lombardi observed.

“It can almost look like a provocation to present as a spiritual reference point to priests of all the world this pastor who lived in a small French town of 200 people, who died 150 years ago,” he contended. “But if the priest truly lives from the Eucharist and from service to the reconciliation between God and man, that is, from the manifestation of the mercy of God, then time and place become secondary.”

That’s why the Pope’s letter to priests, Father Lombardi said, “has a deep touch of spirituality, a great feeling of love for Jesus and for people, particularly for those that are spiritually far from God or in difficulties.”

“Is it not true that there is an urgent and tremendous need for this love that tries to make itself present in the heart of every person?” he asked. “That’s why the Pope speaks of the priest as a gift to the Church and to humanity itself.”