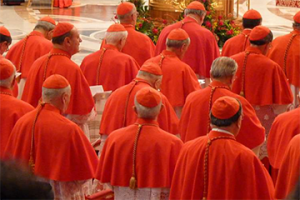 What changes may be coming to the College of Cardinals in 2021?

CNA—When Cardinal Gabriel Zubeir Wako turns 80 on Feb. 27, the cardinals eligible to vote in a conclave will drop to 127, seven more than the limit of 120 set by Paul VI and confirmed by John Paul II.

This means that by the end of the year, cardinals eligible to vote in a conclave will be down to 122, prompting questions of whether Pope Francis will appoint more.

During his pontificate, Pope Francis strongly reshaped the College of Cardinals. In seven years, he has summoned seven consistories (one per year) and created 101 new cardinals, 79 of whom are eligible to vote in a conclave and 22 of whom are not, because they are above the age of 80. To put this in perspective, St. John Paul II summoned nine consistories in 27 years of his pontificate, an average of one every three years.

A conclave now would be composed of 73 cardinals created by Pope Francis, 39 created by Benedict XVI, and 16 created by John Paul II.

Many observers in the Roman Curia believe that, taking into consideration Pope Francis’ modus operandi and the ongoing generational shift within the Curia, it is likely that the pontiff will choose to expand the College of Cardinals to 130, and give the red biretta to the new prefects of the Vatican dicasteries.

Cardinal Robert Sarah’s replacement– Pope Francis accepted his resignation on Feb. 21 – will likely be a non-cardinal in need of a red hat.

Cardinal Beniamino Stella, 79, will leave the Congregation for the Clergy when he turns 80 next August.

This means that the pope could have six new prefects to appoint in the Roman Curia, all positions traditionally run by cardinals.

This, plus the ongoing reform and restructuring of the Curia, will give Pope Francis the opportunity to expand the College of Cardinals, thus having a greater influence on who his successor will be.