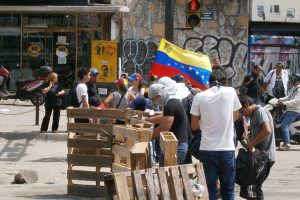 Caracas, Venezuela (CNA)—The vice president of the Bishops’ Conference of Venezuela, Archbishop Baltazar Porras, warned this week that with the closing of 24 radio stations, President Hugo Chavez is “closing the democratic channels of the country,” but that even this could not cover up what is really happening in Venezuela.

Speaking on Union Radio, the archbishop said the latest events must be seen “from a much wider perspective, because this is the closing of the democratic channels of the country.” He said the purpose of the Chavez’s strategy is to “turn the country into a society that has only one ruler, one entity who has all the rights and all the obligations and gives the leftovers to the citizens.”

The Venezuelan president, he said, wants to turn the country “into an army” that follows orders. Archbishop Porras also expressed his concern for the employees of the stations that are being shut down. He encouraged Venezuelans not to lose hope and to defend and fight “for the values and virtues that have allowed us to live together in peace and to progress.”

“Let us not give in to the temptation to violence, to discouragement, to throw in the towel, but rather let us look at things with greater serenity,” he said.