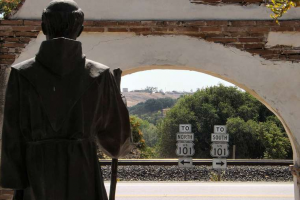 A Spanish bishop recently celebrated Mass in the church where St. Junipero Serra was baptized, defending the saint’s legacy against those who have accused him of racism.

He said the saint has suffered a great injustice in the vandalism of his statues, both in the U.S. and in Mallorca.

Across the U.S. in recent months, protestors and rioters have pulled down statues of historic figures— some depicting Confederate figures, as part of a call to end systemic racism, but also some depicting abolitionists, and others such as George Washington and Ulysses S. Grant.

Despite Serra’s record of defending the rights of indigenous peoples, statues of the saint have become focal points for protests and demonstrations across California in recent weeks, with images of the saint being torn down or vandalized in protest of California’s colonial past.

In addition, a statue of the Franciscan missionary with a Native American youth was tagged with the word “racist” in red paint June 22 in the Spanish town of Palma. Podemos Party legislator Socia Vivas has encouraged the removal of the statue of St. Junípero from Mallorca.

The bishop said he plans to publish the message written by Archbishop Jose Gómez of Los Angeles, which refutes the slander recently leveled against “the evangelizer of California.”

Taltavull also lamented “the anonymous press and blogs” that have been disseminating  “so much bad information,” but added that “suffering persecution is part of the DNA of Christians,” the newspaper reported.