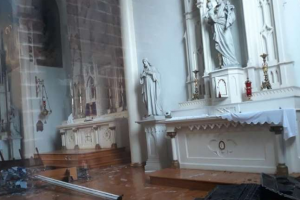 CNA—An historic Catholic church in the Nashville neighborhood of Germantown was among several buildings seriously damaged by a tornado Tuesday night.

The tornado’s main path struck about 100 yards away from the Church of the Assumption in the Diocese of Nashville. The storm destroyed the parish’s north transept, sacristy, and rectory chimney. The winds also badly damaged the building’s steeple and roof.

Fr. Bede Price, pastor of the parish, was able to safely retrieve the Blessed Sacrament from the tabernacle, and he was uninjured in the storm.

Assessments are underway to determine if the parish building can be saved, or if the damage is too severe.

Approximately 21 people were killed by the tornadoes, which struck throughout East Nashville and surrounding suburbs. The death toll has steadily risen throughout Tuesday morning as recovery efforts continue, and many people remain unaccounted for.

Tennessee Gov. Bill Lee (R) called the tornadoes “heartbreaking,” and stated at a press conference that “we have had loss of life all across the state.”

“Four different counties, as of this morning, had confirmed fatalities,” said Lee.

Most of the people who were killed lived in Putnam County, which is located east of Nashville.

Lee said that he and his wife Maria would be praying for the families of those killed, as well as their communities.

“Sudden loss like that can do powerful damage in a community, but it can also bring a lot of hope,” he said.

“There are concerns about the steeple toppling over,” she tweeted. Pictures taken during the daylight hours show that the steeple is leaning decidedly to one side.

Mark Cassman, a parishioner at Church of the Assumption, shared images of the damage on his Facebook page. His pictures show that several of the church’s stained glass windows were partially destroyed in the storm, and as well as damage caused to the building by rocks thrown by the tornado.

“Mass cannot be held here for a while,” said Cassman. “It’s bad.”

The parish’s high altar sustained minimal damage in the storm, although the area of the church located near the side altar was littered with debris.

Church of the Assumption was built in 1858, and was added to the National Register of Historic Places in 1977. It is the home to the only regularly celebrated Traditional Latin Mass in the city of Nashville.

The Diocese of Nashville was unavailable to comment about the damage to Church of the Assumption, and there has not yet been an update to the diocesan website about any relief effort for those impacted by the storm.