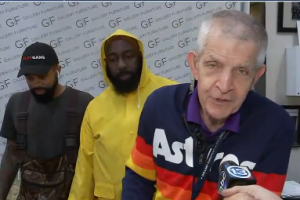 LEAD BY EXAMPLE: Houston Mattress Salesman does the unthinkable for flood victims

“We got through Harvey,” Mattress Mack said on Thursday. “We’ll get through this.”

The Washington Post reported Friday that Jim McIngvale, owner of the Gallery Furniture showroom in Houston, dispatched a number of furniture delivery trucks to rescue stranded residents Thursday as Imelda battered the region, causing heavy flooding in parts of the city.

“I’m a half-capitalist and half-social-worker,” he told the Post. “I can’t let my people drown. It’s so easy to open the doors and let them in. … They’ve got pretty much all the creature comforts they need. We let them in and take care of them, just let them know that people care about them.”

In an interview with FOXNews, McIngvale said his principles of ethics are what guides him.

“We live by this creo that we all have responsibility for the well-being of our community,” explains McIngvale matter of factly. “We take that very seriously and in times of crisis we have to step up and lead…”

A total of 120 people ended up at his furniture showroom after the rescues were completed, the Post reported, including 20 who ended up staying overnight in the store.

“A lot of these homes right here on the northside are badly flooded,” McIngvale told ABC affiliate KTRK. “It’s another tough situation, but we’re going to be here to help like Houston always helps us.”

If you want to help his efforts and the local community of Houston, go to GalleryFurniture.com to learn more.