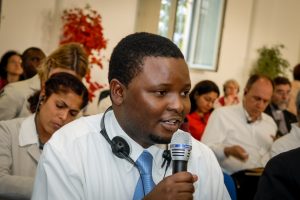 VATICAN CITY, OCT. 12, 2009 (Zenit.org).- A doctor dedicated to helping African AIDS patients is affirming that these people are “coming back to life,” but adds that he sees an even greater miracle in his work.

Doctor Elard Alumando (pictured above), the director of DREAM — Drug Resource Enhancement against AIDS and Malnutrition — in Malawi, affirmed this today during the Twelfth General Congregation of the Second Special Assembly for Africa of the Synod of Bishops. In this session, some of the auditors such as Alumando gave interventions to the Synod. The doctor explained that his program has treated some 80,000 people with HIV/AIDS in 10 African countries.


According to an English summary released by the Vatican, Alumando stated, “I believe that healing the sick is the true way of preventing the spreading of AIDS in Africa, as the Holy Father said with authority during his visit to Cameroon.”

He continued: “I am a witness to many stories of resurrection of people who were ill, especially women and children: women who were considered dead, and started to live and work again; women who rose out of the dark pits of condemnation due to the AIDS disease, out of the prison of social stigma, and who regained their place in the life of their cities.”

The doctor reported that he has seen several thousand children born healthy, free from the virus, due to this treatment. The DREAM program is carried out by the Community of Sant’Egidio in Africa, in communion with other members in Europe. Our treatment centers, the doctor explained, offer “state-of-the-art tri-therapy,” as is administered in the West. He reported: “All the treatment and nutritional support offered to the patients is given for free. In our world dominated by money and corruption, gratuitousness is important.”

Alumando explained that this helps the Africans to “look at disease and healing in the perspective of the Gospel and of the Church, removing them from sorcery and from the mystification of sects.” He concluded, “These acts of healing are not mysterious and incomprehensible wonders, they are the fruit of work, of communion, of prayer and of the love of the Gospel, and that is the true miracle.”