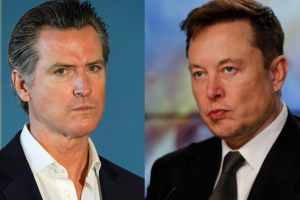 In what is becoming an interesting showdown of Business vs. Government, Tesla founder Elon Musk has thrown down the gauntlet of reopening his manufacturing plant in the face of California Governor Newsom’s extended lockdown orders, with one of Northern California’s counties caught in the middle. To fine, jail, halt or to look the other way, that is the question.

In one of his coronavirus daily briefing at the beginning of April, California’s governor publicly echoed a principle of Marxist-leaning, Chicago-based community activist and political theorist Saul Alinsky.  In the last book Alinsky wrote before his death, Rules for Radicals, he instructed that one should never let a good crisis go to waste.

Echoing this principle from Rules for Radicals, Gov. Newsom responded to a Bloomberg reporter’s question regarding whether the Governor planned to use the crisis to make California even more progressive than it already is, by ultimately responding that yes, this crisis is an opportunity to fundamentally change America.

“There is opportunity for reimagining a progressive era as it pertains to capitalism,” Gov. Newsom explained. “So yes, absolutely we see this as an opportunity to reshape the way we do business and how we govern.”

Newsom went on to talk about how this “shouldn’t send shivers up the spines” of either party, but that it’s necessary to “meet this moment.”

More than a month after that comment, Tesla founder Elon Musk has had enough, tweeting:

As an article in CNN Business put it: “The Tesla (TSLA) and SpaceX founder has used Twitter to downplay the magnitude of the crisis and express frustration with how the pandemic has been handled. And he’s repeatedly urged the end of the stay-at-home policies, despite public health officials’ continued insistence that social distancing remains necessary to avoid a second wave of infections that could again overwhelm hospitals.
Further, CNN Business reported: On a recent earnings call — typically a dry review of financial results — Tesla CEO Elon Musk went off-script, calling stay-at-home orders imposed as a result of the global coronavirus pandemic “fascist.”
Musk’s tweet below is one of many similar tweets to his more than 33.4 million Twitter followers:

“I would call it, ‘forcibly imprisoning people in their homes’ against all their Constitutional rights, in my opinion, and breaking people’s freedoms in ways that are horrible and wrong and not why people came to America or built this country,” Musk said on the call. “It’s an outrage.”

According to several news reports, a spokeswoman for the Fremont Police Department on Monday said her office was enforcing the lockdown order at the direction of the health department and had been advised that the county is working with Tesla directly.

Alameda County Sheriff Sergeant Ray Kelly told Digital Trends that there hadn’t been any discussion of using enforcement to shut down the factory.

Separately on Monday, U.S. Treasury Secretary Steven Mnuchin said California should do whatever is necessary to help the electric carmaker reopen its only U.S. vehicle factory if it wants to keep the company in its state.

California Governor Gavin Newsom on Monday said he spoke to Musk several days ago and that the Tesla founder’s concerns helped prompt the state to begin its phased reopening of manufacturing last week.

In opening the plant, however, Musk tweeted on Monday afternoon:

“Tesla is restarting production today against Alameda County rules. I will be on the line with everyone else. If anyone is arrested, I ask that it only be me.”

“All other auto companies in US are approved to resume. Only Tesla has been singled out. This is super messed up!”

NBC News and MSN report that, “Musk has been locked in a battle with local authorities since March 23, when most of the factory was closed down. Musk has argued that Tesla’s cars are part of “national critical infrastructure,” in line with guidance from the Department of Homeland Security.

“Musk has repeatedly defied the Alameda County ordinance, enacted to prevent the spread of the coronavirus, tweeting that “the coronavirus panic is dumb.” He also tweeted “FREE AMERICA NOW,” in reference to reopening businesses and reversing stay-at-home orders.

The news report continues, “On Saturday, Musk took legal action against Alameda County, threatening to move the Fremont factory out of state if he wasn’t allowed to reopen immediately.

“Frankly, this is the final straw. Tesla will now move its HQ and future programs to Texas/Nevada immediately. If we even retain Fremont manufacturing activity at all, it will be dependent on how Tesla is treated in the future. Tesla is the last carmaker left in CA,” Musk tweeted.

“Tesla is filing a lawsuit against Alameda County immediately,” he posted over the weekend. The suit, filed in the U.S. District Court for the Northern District of California, claims the county overstepped its authority by trying to overrule California Gov. Gavin Newsom.

“Last week, Newsom said some businesses, including manufacturing, could start reopening on May 8, which led Musk to inform workers that they could return on Friday. That same day, Alameda County said Tesla couldn’t reopen til May 18.”

Meanwhile, governors from the states of Texas, Nevada, Georgia and elsewhere have personally invited Musk to set up show in their state.

What do YOU think about Musk’s fight for freedom?