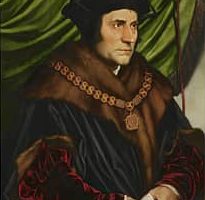 The King’s Good Servant But God is First: Important Considerations for Today’s Catholic Lawyers and Judges

I recently served as one of two moderators for our local St. Thomas More Society’s talk and discussion entitled “The King’s Good Servant But God is First—The rights and duties of officers of the Court regarding Unjust Laws, the HHS Mandate, Same Sex ‘Marriage’ and Beyond.” Needless to say, the topic is controversial and one of great and timely interest, especially during this election season and with all that’s going on with the HHS Mandate, California’s Prop 8 challenge (Proposition 8 is the California state proposition that was overwhelmingly approved by voters several years ago stating simply that marriage in the State of California is defined as only between a man and a woman. —ed.).  I think most of us Catholics would acknowledge these issues as veritable tsunami efforts to secularize our culture.

Lawyers and judges are necessarily at the forefront of the political and legal system in wrestling with these changes which may challenge, may directly conflict with, the common good, Catholic teaching and what is our great natural rights tradition in the United States.

Paraphrasing from a recent article by Carl Anderson and borrowing from our U.S. Founding Founders, who noted that author Alexis de Tocqueville observed a profound connection between religion and liberty in our national life; “Religion does not give [Americans] their taste for freedom,” he wrote.  “It singularly facilitates their use of it.”

George Washington’s Farewell Address insisted that religion and morality of “indispensable supports of our political prosperity,” warning that “reason and experience both forbid us to expect that national morality can be retained without religion.”  And John Adams asserted, “Our Constitution was made only for a moral and religious people.  It is wholly inadequate to the government of any other.”

Those views have been echoed down through our history – perhaps most notably in 1961 when President John F. Kennedy, in his Inaugural Address, spoke of the rights for which our “forebears fought” namely “the belief that the rights of may come not from the generosity of the state, but from the hand of God.”

In his “Letter from a Birmingham Jail, Reverend King stated that those in the Civil Rights Movement “were in reality standing up for what is best in the American dream and for the most sacred values in our Judeo-Christian heritage, thereby bringing our nation back to those great wells of democracy which were dug deep by the founding fathers in their formulation of the Constitution and the Declaration of Independence.”

Then he went on to say, “To put it in the terms of Saint Thomas Aquinas, an unjust law is a human law that is not rooted in eternal and natural law.”  Carl Anderson noted that ironically there you have the ancient teachings of the Catholic church summed up by a Baptist preacher in an Alabama jail for living by it.

So for you lawyers and judges out there, it really comes home, because whether we participate actively in a system that is enforcing unjust laws has a direct impact upon our earning a living.  Then you have to consider between you earning a living versus your conscience and standing before God on judgment day.

Obviously, in a civil society we have to render under Caesar what is Caesar’s.  Then again as Catholic Christians, we’re charged with obeying a law that is higher than a civil law.  An aggressive secular, largely pagan, culture presents lawyers and judges with many challenging circumstances.

·      When do civil laws conflict with the moral law, the natural law?

·      Who decides when a law is so unjust as to warrant resistance or refusal to implement it, or active resistance from it?

·      What do lawyers and judges do when faced with a law that is clearly inconsistent with the moral law as determined by their own well formed consciences?

What I’m suggesting to you is the need for lawyers and judges to exercise in critical thinking, not simplistic, self-serving, personal feelings “thinking,” but rather the thinking mandated by Faith and Reason.

As Catholic Christians we bear an unbelivably heavy burden of complete freedom to act in conformance with our conscience.  The reason that such freedom is burdensome is that ultimately we are fully responsible for acting in accordance with our conscience, making sure it’s well formed with the Magisterium of the church, the patrimony of the church, all as is ultimately judged by our own prudence—that freedom is tempered by the fact that we’re also fully responsible before God for the way that we exercise our freedom.

So I’d like to throw out a few examples and ask some hypothetical questions that maybe we can kick around a little bit, and discuss with Catholic legal colleagues :

·      What if you were on the Supreme Court and an issue came before you of whether or not a slave named Dred Scott was a human being for purposes of the U.S. Constitution?

·      What would you do if you were Oliver Wendell Holmes and you were presented with the issue of whether or not a mentally disturbed or developmentally disabled patient should be subject to mandatory sterilization?

·      What if you were a judge in pre-World War II Germany charged with enforcing properly adopted laws sending Jews to concentration camps?

The Catholic Business Journal encourages Catholic lawyers nationwide to consider these issues with colleagues, in the light of our Faith; an especially fitting consideration given the U.S. Catholic Bishops-sponsored “Fortnight of Freedom” campaign that runs from June 21 – July 4.  To reach author Gregory Weiler, president of the St. Thomas More Society of Orange County, send an email to [email protected]