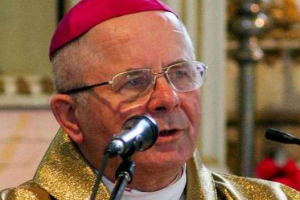 Kaunas, Lithuania, CNA – One of the newest cardinals of the Church says he drew strength from the Mass and the Blessed Virgin during the decade he spent in a Soviet prison camp in Siberia.

Sigitas Tamkevicius, archbishop emeritus of Kaunas, Lithuania, was elevated to the rank of cardinal in the Oct. 5 consistory.

As a priest in Lithuania, Tamkevicius played an active part in resisting communist persecution of the Church. With four other priests, he founded in 1978 the Catholic Committee for the Defense of Believers’ Rights.

He also set up the Chronicle of the Catholic Church of Lithuania, a small magazine – produced on a typewriter – that reported on the situation of the Church and of Catholics in the Baltic state.

In 1983, Tamkevicius was arrested and held by the KGB. He was sentenced to 10 years of forced labor and exile. He served some of his sentence in Siberia.

In a statement to EWTN and ACI Prensa, CNA’s Spanish language sister agency, Tamkevicius explained that during his time in prison, “my stronghold was my faith, which I kept alive by praying a lot.”

“I could only celebrate Mass secretly. I celebrated the Eucharist with great care, and for me it was a great source of strength in prison,” he said.

To get the bread and wine, Tamkevicius resorted to the meal tickets the prisoners received. He was able to receive bread – and could request that it be unleavened – and a dry grape, which he would use to make the wine.

The cardinal said other prisoners would comment about his faith, and the strength that it gave him.

“They told me, ‘It’s easier for you because you have faith, because you can say Mass and that makes you stronger than us.’”

Tamkevicius also turned to the Virgin Mary as a source of strength, from the moment he was sentenced and sent on a train to the forced labor camp.

“I placed myself in the hands of the Virgin,” he said, adding when he returned from the prison camp, he immediately went from the train station to the Chapel of the Virgin of the Gate of Dawn in Vilnius.

“There I celebrated Mass, and gave thanks to the Lord and also to the Virgin,” he said.

In his statement, the new cardinal said his appointment by Pope Francis surprised him. At 80 years old, Tamkevicius will not be able to vote in the next conclave. He emphasized that he sees his appointment as the pope’s effort to draw attention “to the entire Church that suffered during the Soviet years.”

He also echoed Pope Francis’ frequent emphasis on martyrdom, saying “if a believer is not ready to suffer for his faith, then he’s a very weak believer. Our local Church can give a good example to the whole Church, because during the 50 years of Communism, we kept our faith.”