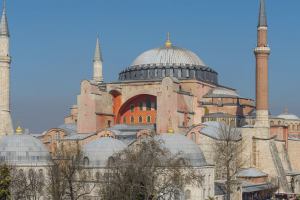 History Matters: The Fall of Constantinople: May 29, 1453

A Lament for Constantinople

You and I grew up learning that Istanbul as the capital of Turkey. We don’t give it a second thought. But Istanbul used to be called Constantinople, once a fortress of Christianity thanks to the remarkable and radical faith conversion of the Emperor Constantine the Great. Famed for its massive and complex defenses, including a double-wall around the city, Constantinople was considered—and had proven itself to be in other battles —impregnable.

So what happened?  How did Constantinople become Istanbul?  Are there lessons for us today in this historic reality?

Here’s a snapshot of that fateful moment in history, culled from Catholic Textbook Project‘s history textbooks:

The new emperor, Constantine XI Palaiologos … still hoped to bring about an alliance with the West. He begged Pope Nicholas V to send theologians to Constantinople, to convince the people and clergy there to accept the union. The pope did send a mission to the emperor, and the result was that the union between the Churches of Rome and Constantinople was solemnly proclaimed on December 12, 1452 in the cathedral of Hagia Sophia—the great church built by Justinian eight centuries before.

But this union, like the one in Florence, was doomed to failure. Most of the Greek priests, the monks, and the people (remembering, perhaps, the sack of Constantinople by the soldiers of the Fourth Crusade) opposed union with the “heretics” and “schismatics” in the West. The pope’s delegates tried to persuade the Greeks that union was necessary, but the people only replied, “Better the turban than the tiara!”—better to be ruled by the sultan than the pope. Sadly, they would all too soon see their wish fulfilled.

Scarcely four months passed after the proclamation of union between the Churches, when the Turks, under their new sultan Mahomet II, a great-great-grandson of Othman, laid siege to Constantinople. So great was the Turkish host that it surrounded the city by land and sea. Mahomet, too, had weap­ons Constantine could not match—enormous bronze cannons that hurled stones at the walls of the city, batter­ing the defenses, so old that they could not long withstand such an assault. Within the city, the Greeks and their few Venetian allies fought bravely; but they battled against overwhelming odds.

Days and Days of Terror

The siege continued from early April to late May 1453. Day in and day out, the citizens of Constantinople—men, women, children, priests, monks, and nuns—repaired the walls that had been breached by the can­nons. Finally, hearing rumors of a Christian fleet coming to aid the city, Mahomet II planned a general assault on Constantinople. On May 28, the day before the assault, Constantine ordered processions along the city walls to beg God’s mercy, to turn away what he called the “just punish­ment sent by God” because of the city’s sins.

(Image: A depiction of the last siege of Constantinople by Theophilos Hatzimihail)

On the evening of the same day, Constantine and all his court attended a Divine Liturgy (Mass) in the Cathedral of Hagia Sophia. Also present were the patriarch and the Latin Cardinal Isidore, churchmen represent­ing both the Latins and the Greeks, and the nobility of the city, along with Venetians and Genoese. The differences between Catholics and Orthodox disappeared in the face of the common danger both faced. In this, the last Divine Liturgy offered in Hagia Sophia, Latins and Greeks together partook of “the undefiled and divine mysteries.” Many worshipers were openly crying and asking each other’s forgiveness.

In the early morning hours of May 29, 1453, Mahomet unleashed his assault on the city, attacking it from three sides. The defenders repulsed two of the attacks; but the last attack overwhelmed them. Mahomet repeatedly threw his Janissaries, 12,000 of them, against the city’s high and strong surrounding walls. A small side door in the wall seems to have been only partly closed, whether by treachery

or the defenders’ battle haste is unknown. After the attacking Janissaries forced the door open, the Turks poured through it and into the city. The emperor, his guards, and several nobles moved out against the invading Janissaries, but they were soon trapped as a fresh onslaught by the Janissaries broke through the city wall.

Despairing of victory for his city, the Emperor Constantine threw off his

imperial insignia, which would have revealed who he was to the Ottomans. With seven other noblemen of the city, he plunged into the onrushing invaders. He was never seen again.

By mid-morning, the streets of the city ran with blood as the invading Turks pillaged and destroyed. Men, women, and children were slaugh­tered in the great cathedral of Hagia Sophia, where many had taken refuge. For three days, the Turks rampaged through Constantinople, murdering its citizens, pillaging private homes, desecrating churches, destroying icons, burning priceless works of theology, philosophy, and literature.

Sometime during the course of these three days of slaughter and may­hem, Mahomet II himself entered the city. Going into Hagia Sophia, he offered there a Muslim prayer. From thenceforth, the great cathedral (at the completion of which the Emperor Justinian had cried, “I have outdone you, Solomon!”) would be a Muslim mosque, and Constantinople (called Istanbul by the Turks) became the capital of the Muslim Ottoman empire. The Byzantine, Eastern Roman Empire was no more.

What are your children or grandchildren learning in their classroom history or social studies textbooks? Will they grow up to understand that they too, as Catholics, have a role in history…or will they grow up thinking history doesn’t include any significant Catholic contributions (such as, hospitals, schools, universities, to name a few)?  On the other hand, Catholic Textbook Project history textbooks are now used in Catholic schools in more than 100 dioceses and highly praised by even secular university award-winning professors. Learn more>