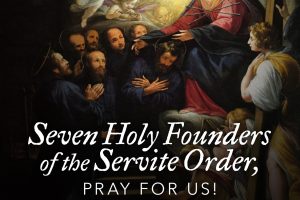 On February 17, we celebrated the feast of the Seven Holy Founders of the Order of Friar Servants of Mary, commonly known as “the Servites.”  This religious community was formed 775 years ago by the radical witness of seven merchant princes from renaissance Florence who gave up the life of material comfort, wealth and industry to retreat to Monte Senario to answer Our Lady’s call to prayer and monastic life, laying the foundation for this mendicant order which today ministers to the body of Christ throughout the world.

As an alumnus of a Servite-run school, I had the opportunity this morning to celebrate this feast day in the company of more than 1000 of my brothers, the current student body of Servite High School in Anaheim, California, who gathered together with the Father Prior General of the Order as well as the Friars convened for Provincial Chapter meetings, to celebrate Eucharist recognizing the 775th anniversary of the order and the 50th anniversary of the founding of Servite High School.  There is something quite spectacular when you gather together in prayer, but to do so with more than 1000 other men is particularly powerful—especially when you listen to them sing a Capella the Salve Regina in Latin.  As one of the faculty members, and herself an alumni mother, said to me, “It doesn’t get any better than this”.

During my time of reflection, I was struck by the fact that before me on the stage/sanctuary (the Mass was in the school auditorium), present in the lives of the Friars of the province, were hundreds of years of life experience dedicated to ministering to the people of God, living the gospel in the spirit of Our Lady of Sorrows (their patroness), who were themselves now looking out at the body of the assembly and seeing before them the most recent student body and wondering, what sort of gift would these students make of their future lives after they leave the friendly confines of the campus and take up their future places in the world.  What a marvelous mystery is this long line of succession  that began with a few Friars coming out from Chicago in the late 1950’s to teach boys from the families of this place called Orange County, California.

Today Servite High School stands among the very best in the nation in terms of achievements in academics, athletics, theater arts, and student government, but perhaps its most impressive credential is its formation program.  Servite High School prides itself on forming Faith-filled leaders through its unique four-year formation program.  This program is multi-dimensional in that it is student-led, incorporates all disciplines from the school community—faculty, coaches, and administrative staff—and is completely dedicated to the principle that no man gets left behind.  No one who attends this school slips through the cracks present in so many of today’s learning institutions. True brotherhood insures that yes; we are our brother’s keeper, and does something about it.

Does it work?  Well, today I had the opportunity to visit with an 85-year-old Servite priest, in town from Denver, Colorado, who had delivered the commencement address to the first graduating class.  As part of today’s anniversary commemoration, he and his fellow priests gathered into small groups with the students for a dialogue encounter.  He was so touched by the authentic stories these students shared of how they have grown in their faith since enrolling in the school.  He was impressed by how easily the students expressed themselves about their faith life.

In more than one case these students shared how they had come back to attending Sunday Mass and were now actually paying attention to the readings and listening to the homilies.  They were trying to understand how God was working in their lives.  This priest, a grizzled veteran of these past decades of cultural challenge, shared with me his authentic sense of the Holy Spirit present on this campus and his pleasure to see that the administration of Servite High School is formed completely of laity, the majority of whom are alumni of the school.  To him it seemed a living example of the universal call to holiness and each baptized Catholic participating in his responsibility to share in the ministry of Christ, not just relying on the sacramental priesthood to take care of things.

Is Servite High School perfect?  No, of course not, it is made up of human beings.  But in this broken and fallible world we live in, it is so comforting to know that schools such as this exit, quietly going about the work of forming Faith-filled leaders who themselves will take responsibility for the world we leave them. Now, more than ever, we need them.

To learn more about Servite High School and the work of the Order of Friar Servants of Mary, visit www.servitehs.org.

Mark McElrath is vice president of DaRue, a Gardena, CA-based women’s clothing manufacturer, leader of the Catholics at Work OC club in Orange Count, CA, and an alum of Servite High School in Anaheim, California.