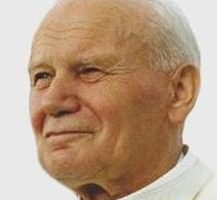 VATICAN CITY  (Zenit.org)— Below is a translation of the homily delivered by Pope Benedict XVI on April 2, at the Mass in St. Peter’s Basilica, to mark the fourth anniversary of Pope John Paul II’s death.

Four years ago, exactly today [April 2], my beloved Predecessor, the Servant of God John Paul II, ended his pilgrimage on earth, after not a brief period of great suffering. We celebrate the Holy Eucharist for the repose of his soul, while thanking the Lord for giving him to the Church for so many years as zealous and generous Pastor. His memory, which continues to be alive in people’s heart, brings us together this afternoon, as demonstrated also by the uninterrupted pilgrimage of faithful to his tomb in the Vatican Grottoes. Therefore, I preside over this Mass with emotion and joy, while greeting you and thanking you for your presence, dear faithful coming from different parts of the world, especially from Poland, for such a significant event.

[Translation from Polish:]
I would like to greet the Poles, particularly Polish youth. On the fourth anniversary of the death of John Paul II, accept his appeal “Do not be afraid to entrust yourselves to Christ. He will guide you, he will give you the strength to follow him every day and in every situation” (Tor Vergata, Vigil of Prayer, Aug. 19, 2000). I hope this thought of the Servant of God will guide you on the paths of your life, and lead you to the happiness of the morning of the Resurrection.

[Translation from Italian:]
I greet the cardinal Vicar, the cardinal archbishop of Krakow, and the other cardinals and prelates; I greet the priests and the men and women religious. I greet you in a special way, dear young people of Rome, with this celebration you prepare yourselves for the Word Youth Day that we will live together next Sunday, Palm Sunday. Your presence brings to mind the enthusiasm that John Paul II was able to infuse in the new generations. His memory is a stimulus for all of us, gathered in this basilica where on many occasions he celebrated the Eucharist, to let ourselves be illumined and challenged by the Word of God, just proclaimed.

The Gospel of this Thursday of the fifth week of Lent proposes for our meditation the last part of Chapter 8 of John, which contains a long dispute over the identity of Jesus. Shortly before he had presented himself as “the light of the world” (12), using on three occasions (24, 28, 58) the expression “I am,” which in a strong sense alludes to the name of God revealed to Moses (cf. Exodus 3:14). And he adds: “If any one keeps my word, he will never see death” (51), thus declaring he was sent by God, who is his Father, to take to men the radical deliverance from sin and death, indispensable to enter into eternal life. However, his words wound the pride of his interlocutors, and also the reference to the great Patriarch Abraham became a motive for conflict. “Truly, truly , I say to you, before Abraham was, I am” (8:58).

Without mincing words, he declares his pre-existence and, therefore, his superiority in respect of Abraham, arousing — understandably — the scandalized reaction of the Jews. But Jesus cannot be silent about his own identity; he knows that, in the end, the Father himself will vindicate him, glorifying him with death and resurrection so that, precisely when he is raised on the cross, he is revealed as the only begotten of God (cf. John 8:28; Mark 15:39).

Dear friends, meditating on this passage of the Gospel of John, the consideration arises spontaneously of how difficult it is to witness to Christ. And our thought goes to the beloved Servant of God Karol Wojtyla — John Paul II — who from his youth showed himself a bold and daring defender of Christ: He did not hesitate to consume all his energies in order to spread the light everywhere; he did not accept to give in to compromises when it was a question of proclaiming and defending [Christ’s] truth; he never tired of spreading [Christ’s] love. From the beginning of his pontificate until April 2, 2005, he was not afraid to proclaim to all and always that Jesus alone is the Savior and the true Liberator of man and of all men.

“I will make you exceedingly fruitful” (Genesis 17:6). If giving witness of one’s adherence to the Gospel has never been easy, we are certainly comforted by the certainty that God makes our commitment fruitful, when it is sincere and generous. The spiritual experience of the Servant of God John Paul II also seems significant to us from this point of view. Looking at his life, we see realized in it the promise of fruitfulness made by God to Abraham, which is echoed in the first reading, taken from the Book of Genesis. It could be said that, especially in the years of his pontificate, he engendered many sons and daughters in the faith. You are visible signs of this, dear young people present this afternoon: you, young people of Rome and you, young people from Sydney and Madrid, who represent ideally the multitude of boys and girls who have participated in the by now 23 World Youth Days in different parts of the world. How many vocations to the priesthood and to consecrated life, how many young families determined to live the evangelical ideal and to tend to holiness are united to the testimony and the preaching of my venerated Predecessor! How many boys and girls have been converted, or have persevered on their Christian path thanks to his prayer, his encouragement, his support and his example!

It is true! John Paul II was able to communicate a great amount of hope, founded on faith in Jesus Christ, who “is the same yesterday and today and for ever” (Hebrews 13:8), as the motto of the Great Jubilee of 2000 stated. As affectionate father and attentive educator, he indicated sure and firm points of reference indispensable for all, in a special way for youth. And in the hour of agony and death, this new generation wished to manifest to him that it had understood his teachings, silently recollected in prayer in St. Peter’s Square and in so many other places of the world. Young people felt that his disappearance constituted a loss: “Their” Pope was dying, whom they regarded as “their father” in the faith. They realized at the same time that he was leaving them as inheritance his courage and the consistency of his testimony. Had he not underlined many times the need for a radical adherence to the Gospel, exhorting adults and young people to take this common educational responsibility seriously? I have also wanted to take up this longing of his, pausing on different occasions to speak of the educational emergency that concerns families, the Church, society and especially the new generations today. In the age of growth, young people need adults capable of proposing their principles and values: They see the need for persons that are able to teach with their life, rather than with words, to spend themselves for lofty ideals.

But where can one get the light and wisdom to carry out this mission, which involves every one in the Church and in society? It is certainly not enough to take recourse to human resources; it is necessary to trust in the first place in divine help. “The Lord is faithful forever”: This is how we prayed a while ago in the Responsorial Psalm, certain that God never abandons those who remain faithful to him. This reminds us of the theme of the 24th World Youth Day, which will be held at the diocesan level next Sunday. The theme is taken from St. Paul’s first Letter to Timothy: “We have our hope set on the living God” (4:10). The Apostle speaks in the name of the Christian community, in the name of all those who have believed in Christ and are different from “others who have no hope” (1 Thessalonians 4:13), precisely because they hope, nourish confidence in the future, a confidence not based on ideas or human foresight, but on God, the “living God.”

Dear young people, we cannot live without hope. Experience shows that every thing, and our own life, runs the risk, can collapse for any reason internal or external to us, at any moment. It is normal: Everything that is human, hence hope, has no foundation in itself, but needs a “rock” on which to anchor itself. This is why Paul wrote that Christians are called to base human hope on the “living God.” He alone is sure and trustworthy. What is more, only God, who has revealed the fullness of his love in Jesus, can be our firm hope. In him, our hope, we have in fact been saved (cf. Romans 8:24).

However, pay attention: In times such as these, given the cultural and social context in which we live, the risk can be stronger of reducing Christian hope to an ideology, to a group slogan, to an exterior coating. There is nothing more contrary to Jesus’ message! He does not want his disciples to “recite” a part of his teaching, perhaps that of hope. He wants them to “be” hope, and they can be so only if they remain united to him! He wants each one of you, dear young friends, to be a small source of hope for your neighbor, and to be, all together, an oasis of hope for the society in which you are inserted. Now, this is possible with one condition: That you live of him and in him, through prayer and the sacraments, as I have written you in this year’s message. If Christ’s words remain in us, we will be able to carry high the flame of that love that he has enkindled in the earth; we can carry high the flame of faith and hope, with which we advance toward him, while we await his glorious return at the end of time. It is the flame that Pope John Paul II has left us as inheritance. He has given it to me, as his Successor; and this afternoon I hand it over once again, in a special way, to you, young people of Rome, so that you continue to be morning watchmen, vigilant and joyful in this dawn of the third millennium. Respond generously to Christ’s call! In particular, during the Priestly Year that will begin next June 19, make yourselves readily available if Jesus calls you to follow him on the path of priesthood and of consecrated life.

“This is the favorable moment, this is the day of salvation.” Along with the Gospel, the liturgy has exhorted us to renew now — and every instant is a “favorable moment” — our determined will to follow Christ, certain that he is our salvation. Finally, this is the message that John Paul II repeats to us this afternoon. While we entrust his chosen soul to the maternal intercession of the Virgin Mary, whom he always loved tenderly, we very much hope that from heaven he will not cease to accompany us and intercede for us. That he will help each one of us to live, as he did, repeating with full confidence day after day to God, through Mary, Totus tuus. Amen!

The Catholic Business Journal also recommends an excellent article commemorating this day which appeared in Inside the Vatican: