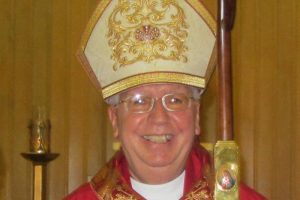 The Most Reverend Cirilo Flores: The Most Recent in Apostolic Succession

Mark McElrath, vice president of the clothing manufacturer DaRue of California, gives a gripping first-hand account of a rarely seen event in the United States, namely, the ordination of a bishop, the newly ordained Bishop Cirilo Flores (pictured above).. —ed.

Since the day of Pentecost, when the Holy Spirit descended upon those gathered in the upper room and the church was born, there has been an uninterrupted line in the succession of bishops through the imposition of hands to this very day.  On March 19, 2009, the feast of St Joseph; I was privileged to witness the ordination of the most recent apostolic successor, The Most Reverend Cirilo Flores, Titular Bishop of Quiza, Auxiliary Bishop of Orange.

The ordination of Bishop Flores was a most impressive event. Held at St Columban parish church in Garden Grove, Calif., which serves as the ceremonial church for the Diocese of Orange due to its size and central county location, this ordination included 31 members of the College of Bishops (bishops from around the country), Bishops of the Eastern Rite Churches, hundreds of presbyters from the Diocese of Orange, clergy from the ecumenical community, religious dignitaries from the interfaith community, the Knights and Ladies of Malta, the Knights and Ladies of the Equestrian Order of the Holy Sepulcher, the color corps of the Knights of Columbus served as the Honor Guard.

The liturgy was conducted in English, Spanish and Vietnamese. The church was filled to standing room only, to which I can personally attest.  The ordination ceremony was awesome and wonderful, inspiring and humbling.  It reminded me of what a beautiful mystery this church, this body of Christ really is. The Catechism of the Catholic Church teaches us that the fullness of the ordained priesthood is present in the person of the Bishop, the successors to the apostles.  The ordained priest or presbyter, shares in that ministry. But the catechism also teaches us that each baptized Catholic shares in the priestly ministry of Jesus.

In a real sense, we bless the world and those in it by making our lives a sacrificial offering to Christ each and every day.  This visible witness of Episcopal ordination was a powerful reminder as to the evangelistic mission of the most ordinary of baptized lay Catholics and the Ordinary of the particular church which is the local diocese. Here in the United States, Episcopal ordination stretches back to the year 1789 with the ordination of Bishop John Carroll, proto-episcopus for the Diocese of the United States of America.  During his 30 years as bishop, his flock grew from approximately 25,000 souls to just over 200,000.

At that same time, here on the West coast, the Church was under the jurisdiction of the Bishop of Mexico City and the work of Blessed Junipero Serra and his missionary Franciscan Friars who enriched the daily lives of their flock. Cirilo Flores, D.D., J.D., is a worthy successor to both Bishop Carroll and Blessed Serra.  Flores, 60, was raised in a bi-cultural household in Corona, California, which is symbolized on his coat of arms with the image of a crown.  He was educated in Los Angeles at Loyola Marymount University, graduated from Stanford Law School, and practiced as an attorney.  However he heard the call to a priestly vocation and returned to school to study at St John’s Seminary in Camarillo. He was ordained a transitional deacon and, in 1991, a priest for the Diocese of Orange by now-retired Bishop Norman F. Macfarland who generously agreed to serve as principle co-consecrator of Bishop-Elect Flores with Bishop Dominic Luong and principle consecrator Tod David Brown, Bishop of Orange.

Together these men are charged with the responsibility to shepherd the flock of over a million souls within a geographic area that encompasses 948 square miles and is as ethnically rich as a gathering of the UN general assembly. In other words, this diocese, perched on the edge of the Pacific Rim, truly exemplifies the catholicity (universality) of our church. As Bishop Flores was invested with the symbols of his new office—the handing on of the book of the Gospels, the crosier, the miter and ring, I reflected on the responsibility this man had just accepted. I wondered, what must he be feeling? Excitement, fear, humility, pride?  All of it I’m sure, but God has called him to this point and prepared him well for this purpose.

Being a man of his times, Cirilo Flores is prepared to continue this ongoing battle between the spirit of the world and its allures and the truth which is Jesus Christ.  His Episcopal motto says it well, “All for the Greater Glory of God.”  This Jesuit motto seems particularly appropriate as we struggle with the most recent heresy of these modern times which Pope Benedict XVI has appropriately named the “Dictatorship of Relativism”. My time of reflection included the understanding that we baptized laity are each called to join in this battle.

The way we live our lives, conduct our business, love and serve our neighbors, accept our responsibility for parish life and live the domus ecclesia in our families. All of this is the field of battle and we arm ourselves with the weapons of prayer, study and action. The world is challenged on so many fronts right now, none more so than in our daily lives. But Christ promised to be with us always.  This ordination of Bishop Flores is a visible sign of that promise made more than two millennia ago.  After the final blessing, as we went forth from that sacred space, singing the traditional hymn “Now Thank We All Our God;” I could not help but say to myself, via con Dios Bishop Flores, we go with you.