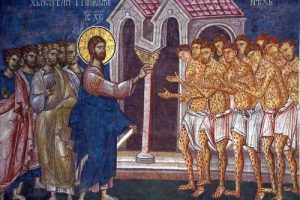 When is the last time you took a quiet moment and allowed yourself the inner silence to listen to the whisper of the Holy Spirit?  To what were you invited—conflict resolution, another perspective, decisive action, compelling insight, inner peace, silence?  Did you follow the prompting?  This past Sunday, the Feast of Christ the King, such a moment of quiet prompting led me to attend a different parish and a later-than-usual Mass.  But it was not until the homily that I realized what a gift I’d been given.

Let me share with you the heart of that sermon: the remarkable story of one leader’s life-changing encounter with Pope John Paul II.  I think that you, like me, will find rich applications for your life’s work…

Fr. Sonny Rameriz, former director of Radio Veritas, is tall, robust man, nearly flawless in his English-speaking skills. His appointed position as director of one of the largest Catholic radio networks in the world, broadcasting throughout all of Indonesia and the Philippines, was much envied by his fellow priests. At the time, still a young priest, he felt pretty lucky himself.

But last Sunday, while visiting St. Joseph’s parish—a small parish community nestled amid a cluster of cities in the San Francisco East Bay—Fr. Sonny spoke about a very different experience than his leadership at Radio Veritatis.

Instead, he painted a vivid picture of what it means to truly lead like Christ —No excuses, No fanfare. No hesitation.

As you remember, the theme of last Sunday’s Gospel was: “Whatsoever you do to the least of my brethren, that you do unto me.”

Serving the least of my brethren

“One of my first assignments was to serve the lepers.  I worked there for six months, and I tell you honestly that I hated it….” So began Fr. Sonny’s story.

This new priest hated the stench.  He hated the way, as he put it, “these people gave you more than a hand shake. They gave you parts of their bodies!  Their skin and body parts would flake off or fall off all the time.  While eating at table, an ear would fall off, sometimes in the soup…. I would ask, ‘OK, whose ear is this in the soup?’ Pus and blood often oozed from their sores.  And the stench.  The stench was nearly unbearable….

“When I was finally transferred from the leper community,” Fr. Sonny continued, “I was determined that I would never, ever work with lepers again.  Never again!”

And so his determination bore fruit.  Fr. Sonny was next appointed to the prestigious position of director of Radio Veritas.  It was a huge honor, and with it came tremendous responsibility.  He executed his duties well, excellently in fact.  Several years later, Fr. Sonny played an integral part in preparations for the late Pope John Paul II’s historic visit to the Philippines.

The Holy Father let it be known ahead of time that he wished to include a visit with the lepers as part of his itinerary. Since the visit was short, the Vatican asked that the lepers be brought to the Radio station so that the Pope could meet them there rather than having him drive out to the colony.

“NO WAY!” thought Fr. Sonny. He acted quickly when he heard this news. He was not about to let the lepers come to his radio station!  He knew better than most what that meant. The stench. The falling body parts. This important visit was not going to take place in his radio station!

Fr. Sonny’s thoughts quickly became actions: “I acted faster than the planners and orchestrated the hasty construction of a new building for the lepers. I knew there was no way I would allow those people to come to my radio station, my work place!”

Preparations continued without problem and the day arrived for the Holy Father’s visit.  Arriving with the Cardinal and a small entourage, Pope John Paul II met with the young priest director of the Radio Veritas.  But soon after formalities and greetings, the Holy Father inquired about “his favorite people.”  “When will we meet with my favorite people?” he asked.

The Cardinal assumed that Pope John Paul II meant something different.  But Fr. Sonny cut in.  He knew what the Holy Father meant. “The lepers?” Fr. Sonny smiled. “They are in the new building waiting for you.” Fr. Sonny then indicated the person who would be leading the way.

The Simple Invitation of Love

As the entourage filed out of the office, Pope John Paul II turned to Fr. Sonny, “You are not coming with us?”

But then Pope John Paul II did something unexpected.  Something irresistible.  The Pope walked back over to Fr. Sonny and took his hand.  “Come,” he enjoined the priest. “Come with us.”

“What could I do?” lamented Fr. Sonny. “I had to go with the Holy Father.”

We in the congregation laughed at this point in the story; of course we thought we knew what was coming next.  But instead, it was here that the remarkable happened.

Keep in mind that no media were allowed to accompany the Holy Father on this next segment of his visit.

“When we entered the building where the lepers were waiting,” Fr. Sonny recounted, “the Holy Father was greeted by three children.  The children were bald.  They had lacerations on their heads where the leprosy was starting.  Blood and ugliness were in their wounds, large, gaping wounds.”

“Pope John Paul leaned down and kissed each child,” the priest continued, describing the moment so vividly as if it were yesterday. His voice cracked as he continued:  “The Pope  did not kiss their hands or cheeks.  He kissed their heads.  He kissed their wounds.

“The Pope was smiling, joyous.  He had such a big smile—from ear to ear.  You could see how happy he was.  ‘Thank you,’ the Pope told the children, ‘Thank you for letting me kiss the wounds of Christ.’”

The priest continued to describe the moment: “As Pope John Paul wandered up to the front of the room, he kissed each leper.  He embraced each one.  He blessed them.  And his smile and joy grew with each new greeting.  Again, as he spoke to them, he thanked them for letting him kiss the wounds of Christ.

“There was not a dry eye in the room,” the priest continued.  “The Cardinal had to leave.  He was bawling like a baby.  Just crying.  We were all crying.  But not Pope John Paul II.  He was smiling and filled to overflowing with joy.”

Pope John Paul II meeting and mingling with his beloved lepers was an encounter with Christ.  Not Christ removed, far from us, beautified in art.  But Christ as he is today, now, in front of us, in the moment, entrenched amid all the realities of human earthly existence.

Fr. Sonny was so convicted in his own failings as he watched the Holy Father’s unspoken Christ-inspired leadership in greeting the lepers, that he asked to speak to the Pope privately for a minute.

In response, Pope John Paul II led Fr. Sonny to see the importance of being attentive to Christ every single day of his life, wherever and however Christ presents himself.  The Holy Father advised the priest to get out into the world and encounter Christ, to seek him and him alone.

Fr. Sonny resigned from his prestigious radio position immediately.  Since then he has refused all offers involving positions of authority.

Now, so many years later, Fr. Sonny says he is the happiest and luckiest priest in the world.  And the radience of his smile reveals he speaks the truth.  In the Philippines, Fr. Sonny now serves Christ in the forgotten elderly and frail, the destitute and sick also, but especially now in the elderly.  Since that moment witnessing Pope John Paul II with the lepers, his life has so dramatically changed that he has many times given retreats for Mother Teresa and her Sisters of Charity.

“Are we are asked by Christ to pray for monthly bread or yearly bread?” Fr. Sonny asked us rhetorically.  “No!  Christ asked us to pray for our daily bread!  We are too busy, too distracted,  thinking about tomorrow for us to pay attention to Christ today…. Yet it is today that we encounter him…”

Thinking of you, a fellow Catholic in business…


As I listened to that homily on Sunday, I thought of you, dear reader of the Catholic Business Journal.

Yes, economic times are difficult, and they will likely get worse before they get better.  It has been difficult for generations before us.  It will be difficult again in future generations.

Is Christ hidden from our eyes in the annoying client? …the exasperating employee?  …the business colleague who keeps blocking our big plans from going forward?  Is Christ embodied in the person next to us in the unemployment line?  Is he the insecure boss or the suffering business partner?

We all seek deeper meaning in our life, in our work.  Christ, and Christ alone, will give us that meaning.  And by living Christ, day by day, we bring him to our business colleagues and co-workers and employees and clients and to each person we meet; each encounter with Christ…  We don’t necessarily bring him by words alone, not by arguing, not by debating, not by preaching – at least not always, and definitely not by any of those things alone.  Rather, we bring Christ by listening, praying, seeking.  Christ will reveal to us through the complexity and simplicity of our day to day lives where he wants us to be, and how he wants us to serve him.

Pope John Paul II did not explain his actions with the lepers.  Yes he “spoke” volumes to all present.  No one who witnessed his actions was not infected with and inspired by his super-human love.  It is a love born of prayer.  His actions pointed —without a syllable—to Christ.  That is what it means to lead like Christ.

A blessed Thanksgiving and Advent to you! —ed.