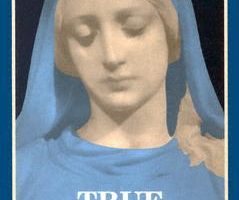 Consecration to Mary: Start This Week and Finish on Feast of Assumption

In talking with a friend a while back, we figured out that if you start the Consecration to Mary today (July 14) — the St. Louis de Montefort one is the most popular one and the one that St. Maximillian Kolbe used originally, then you’ll end up making your Consecration on the Feast of the Assumption (Aug 15).

The book is called “True Devotion to Mary” by St. Louis de Montfort — but I think there are other versions of his book.

Here’s some feedback on the Consecration:


Unpublished during the saint’s life time, it has enjoyed the endorsement of the many outstanding popes the Church has been blessed with since its discovery in 1842. John Paul II, in particular, was its tireless champion, crediting True Devotion with a turning-point in his spiritual life, adopting his motto, Totus tuus, from St. Louis.

The key to De Montfort’s Marian spirituality is that he considered Our Lady to be the infallible and chosen gate to the heart of Christ – To Jesus through Mary: it is Christ Himself Who is at the centre of True Devotion.

The August 15 Consecration date may seem rushed at this point, with St. Louis de Montfort’s recommendation for 12 days of preliminary preparation to detach oneself from the allure of the world, and one full week each thereafter devoted to immersing our thoughts in the knowledge of self, knowledge of the Blessed Virgin and knowledge of Jesus Christ.

But some alternatives include what many people world wide do — They take 3 days for the preliminary preparation period, and then follow the weekly themes, as directed in the Saint’s book, “True Devotion to Mary.”  Another option is to move the date of your Consecration to another Marian Feast day, such as December 8.

This particular Consecration, and its annual renewal, is life-changing.  Absolutely life-changing.  Whether at the stage of being fully engaged or just dipping one’s big toe in the water, so to speak, the abundant grace and blessings that well-up in one’s soul over the entire period of preparation are unmistakable and powerful, and they yield a peaceful sense of purpose that is beyond imagination.

Here is a link to the Consecration prayers and reflections if you need to order a book:

Here is a link to find a Catholic book and gift store in your area (enter zip code):