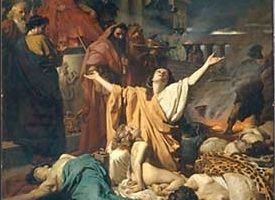 
1 It happened also that seven brothers and their mother were arrested and were being compelled by the king, under torture with whips and cords, to partake of unlawful swine’s flesh. 2 One of them, acting as their spokesman, said, “What do you intend to ask and learn from us? For we are ready to die rather than transgress the laws of our fathers.” 9 And when he was at his last breath, he said, “You accursed wretch, you dismiss us from this present life, but the King of the universe will raise us up to an everlasting renewal of life, because we have died for his laws.” 10 After him, the third was the victim of their sport. When it was demanded, he quickly put out his tongue and courageously stretched forth his hands, 11 and said nobly, “I got these from Heaven, and because of his laws I disdain them, and from him I hope to get them back again.” 12 As a result the king himself and those with him were astonished at the young man’s spirit, for he regarded his sufferings as nothing. 13 When he too had died, they maltreated and tortured the fourth in the same way. 14 And when he was near death, he said, “One cannot but choose to die at the hands of men and to cherish the hope that God gives of being raised again by him. But for you there will be no resurrection to life!”


2:16 Now may our Lord Jesus Christ himself, and God our Father, who loved us and gave us eternal comfort and good hope through grace, 17 comfort your hearts and establish them in every good work and word. 3:1 Finally, brethren, pray for us, that the word of the Lord may speed on and triumph, as it did among you, 2 and that we may be delivered from wicked and evil men; for not all have faith. 3 But the Lord is faithful; he will strengthen you and guard you from evil. 4 And we have confidence in the Lord about you, that you are doing and will do the things which we command. 5 May the Lord direct your hearts to the love of God and to the steadfastness of Christ.


27 There came to him some Sadducees, those who say that there is no resurrection, 28 and they asked him a question, saying, “Teacher, Moses wrote for us that if a man’s brother dies, having a wife but no children, the man must take the wife and raise up children for his brother. 29 Now there were seven brothers; the first took a wife, and died without children; 30 and the second 31 and the third took her, and likewise all seven left no children and died. 32 Afterward the woman also died. 33 In the resurrection, therefore, whose wife will the woman be? For the seven had her as wife.” 34 And Jesus said to them, “The sons of this age marry and are given in marriage; 35 but those who are accounted worthy to attain to that age and to the resurrection from the dead neither marry nor are given in marriage, 36 for they cannot die any more, because they are equal to angels and are sons of God, being sons of the resurrection. 37 But that the dead are raised, even Moses showed, in the passage about the bush, where he calls the Lord the God of Abraham and the God of Isaac and the God of Jacob. 38 Now he is not God of the dead, but of the living; for all live to him.”

Reflection for the day: “The Christian who desires to follow Jesus carrying His cross must bear in mind, that the name ‘Christian’ means ‘learner or imitator of Christ’ and that if he wishes to bear that noble title worthily, he must above all do as Christ charges us in the Gospel – we must oppose or deny ourselves, take up the cross and follow Him.” — St. Anthony Mary Claret 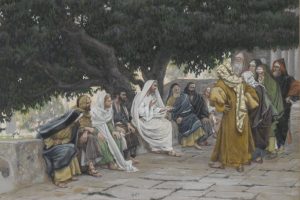