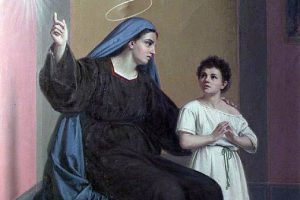 26 For consider your call, brethren; not many of you were wise according to worldly standards, not many were powerful, not many were of noble birth; 27 but God chose what is foolish in the world to shame the wise, God chose what is weak in the world to shame the strong, 28 God chose what is low and despised in the world, even things that are not, to bring to nothing things that are, 29 so that no human being might boast in the presence of God. 30 He is the source of your life in Christ Jesus, whom God made our wisdom, our righteousness and sanctification and redemption; 31 therefore, as it is written, “Let him who boasts, boast of the Lord.”

12 Blessed is the nation whose God is the LORD, the people whom he has chosen as his heritage! 13 The LORD looks down from heaven, he sees all the sons of men; 18 Behold, the eye of the LORD is on those who fear him, on those who hope in his steadfast love, 19 that he may deliver their soul from death, and keep them alive in famine. 20 Our soul waits for the LORD; he is our help and shield. 21 Yea, our heart is glad in him, because we trust in his holy name.

Reflection for the day: “Many a mother, who is anxious for her son’s bodily welfare, neglects his soul. So, did NOT the Saint of today – her son might be accomplished, eloquent, able and distinguished – all this was nothing to her, while he was dead in God’s sight, while he was the slave of sin, while he was the prey of heresy. She desired his true life. She wearied heaven with prayer and wore out herself, with praying – she did not at once prevail. He left his home, he was carried forward by his four bearers – ignorance, pride, appetite and ambition – he was carried out into a foreign land, he crossed over from Africa to Italy. She followed him, she followed the corpse, the chief, the only mourner- she went where he went, from city to city. It was nothing to her to leave her dear home and her native soil, she had no country below; her sole rest, her sole repose, her Nunc dimittis, was his new birth. So while she still walked forth in her deep anguish and isolation and her silent prayer, she was at length rewarded by the long-coveted miracle. Grace melted the proud heart and purified the corrupt breast of Augustine and restored and comforted his mother!” — Bl. John Henry Newman (regarding St. Monica)