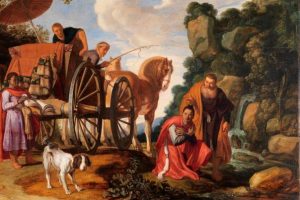 
7 Who rules by his might for ever, whose eyes keep watch on the nations — let not the rebellious exalt themselves. [Selah] 8 Bless our God, O peoples, let the sound of his praise be heard, 15 I will offer to thee burnt offerings of fatlings, with the smoke of the sacrifice of rams; I will make an offering of bulls and goats. [Selah] 16 Come and hear, all you who fear God, and I will tell what he has done for me. 19 But truly God has listened; he has given heed to the voice of my prayer.

Reflection for the day: “The rediscovery of the value of one’s baptism is the basis of the missionary commitment of every Christian, because we see in the Gospel that he who lets himself be fascinated by Christ cannot do without witnessing the joy of following in his footsteps… we understand even more that, in virtue of baptism, we have an inherent missionary vocation.” — Pope Emeritus Benedict XVI